The #2Mikes become #OneMike since Lipinski is out with the manflu!  Frank Klose joins Watkins to perform an audio autopsy on the 2019 Philadelphia Phillies.

With it being the middle of a very hectic season of Phillies baseball, we at Sports Talk Philly assembled three of our Phillies writers at Philliedelphia, our managing editor Matt Rappa, our owner and man in charge of Phillies coverage for 97.3 ESPN's website Frank Klose, and staff writer Matt Gregan, to talk about some of the key questions, concerns and rumors flying around the team right now.

The day after the World Series is the day players may file for free agency.  The Phillies have a handful of their own free agents who took the usual steps.  Infielder Asdrubal Cabrera, catcher Wilson Ramos, reliever Aaron Loup and outfielder Jose Bautista all filed for free agency on Monday.  All four players were acquired by the Phillies down the stretch run.

Cabrera is likely not a fit for the Phillies going forward, depending on how the team decides to move forward.  With several younger infielders and the Phillies shooting much higher in adding an infielder such as Manny Machado, Cabrera is not a likely fit to return.  Cabrera batted .228 for the Phillies with 13 doubles and five home runs in 49 games.

Ramos is an interesting name.  The Phillies would likely love to have a veteran catcher to work with Jorge Alfaro, who is improving and should be the team's long-term solution at catcher.  Injuries played Ramos during his two year deal with the Tampa Bay Rays (he was signed knowing he would begin the year on the disabled list in 2017) which could limit the number of years on a deal. The Phillies probably will not go too long-term with Ramos but might wish to bring him back.

Loup barely pitched for the Phillies.  Acquired at the July 31 trade deadline to be a bullpen left-handed pitcher, Loup promptly got injured.  He would make just nine appearances for the Phillies in the final two months, allowing two runs in four innings.  Luis Avilan joined the Phillies in August, probably meaning there is no room for Loup.

Bautista put together 57 at bats over 27 games for the Phillies in September after being acquired from the New York Mets.  The Phillies might have enough internal options for a right-handed bat for the bench, particularly if the Phillies add a big name outfielder, moving the likes of Aaron Altherr to the bench.

It's here.  The famous 2018-2019 MLB offseason is finally upon us.  This year's free agent class is loaded with big name players and teams such as the Phillies are salivating over some of them.  The two biggest are outfielder Bryce Harper and infielder Manny Machado.  Perhaps you were aware that both are free-agents-to-be.

But on this first day of the offseason, new odds were released in Vegas as to where some of the big names will sign.  The Phillies found themselves listed as the top favorite to land both Harper and Machado, according to oddsmaker Bovada:

Of course, the Phillies will have to get to the finish line. The Phillies have plenty of money to make deals happen.

At times, some have suggested that the Phillies might be able to land both players.  In either case, the Phillies would be added a much-needed offensive presence to their lineup that contains slugger Bryce Harper and many young players.

This offseason is a crucial one for the Phillies, who have not been able to develop impact-level talent like those approaching free agency.

The Phillies took a bold step last offseason to add a bat who could hit from the left side.  They went for Carlos Santana, a switch-hitter, instead of other options such as Carlos Gonzalez.  The move bumped first baseman Rhys Hoskins to left field. But with their defense rather poor in 2018 and with many players out of position, there has been much speculation that Hoskins should return to his natural position of first base.

To do that, the Phillies will have to do one of two things: Move Santana to third base, or move Santana to another team.  They may have a trade partner. Last offseason there were perhaps four teams reportedly in on Santana as he waded through free agency.  One was the Phillies.  Another was his former team, the Cleveland Indians. The World Champion Boston Red Sox were said to be interested.  They ultimately gave Mitch Moreland a two-year deal.

What we're thankful for in Philly Sports for 2017

In the world of sports, there are things that excite us, leave us in a state of wonder, and things that bring us together.

This Thanksgiving, there are so many things in the world of Philly Sports that we are thankful for, especially when the Eagles and Sixers are prevalent as winning teams in this city.

The editors of Sports Talk Philly took time to share what they are most thankful for about Philadelphia sports on this Thanksgiving Day.

Continue reading "What we're thankful for in Philly Sports for 2017" »

When the Phillies traded for starting pitcher Jeremy Hellickson last offseason, the plan was for Hellickson to be a veteran arm in the midst of a very young starting rotation.  While similarly-tabbed Charlie Morton fell to an injury early in the season, Hellickson was a stable rotation force among instability.  As Vince Velasquez went through an injury and was shut down early and Aaron Nola and Zach Eflin had season-ending injuries, Hellickson was with the rotation start to finish.   Now that Hellickson is facing a qualifying offer, it is a win-win situation for the Phillies to offer him the $17.2 million qualifying offer. 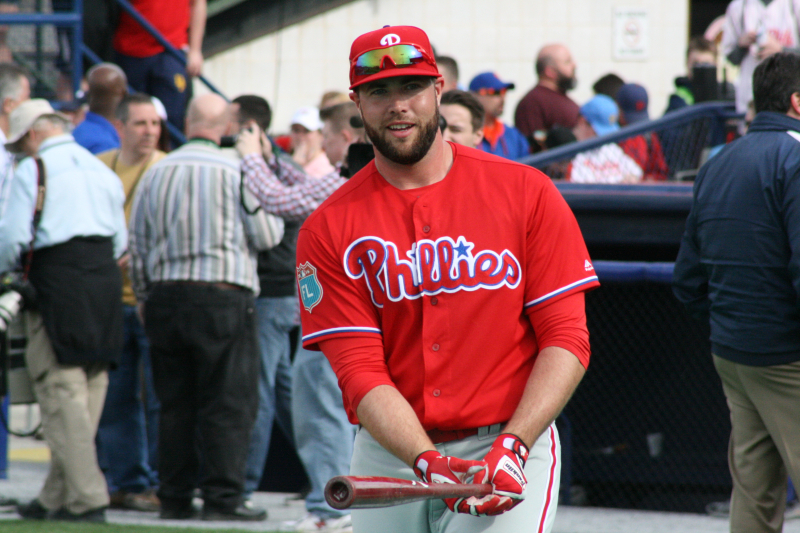 Once again it is time for the Phillies mailbag.  Each week we take your questions and post them to 973espn.com and to sportstalkphilly.com.   Send a question at any time to @FrankKlose on Twitter or our Sports Talk Philly Facebook page.

Which former Phillies player has the best chance to win a World Series in 2016?
~Rafael

This is a pretty good question.  Right off the bat we know that the answer will not be pitchers Cole Hamels or Jake Diekman.  The former Phillies duo combined for 10 runs in game one of the American League Division Series, as the Toronto Blue Jays swept the Texas Rangers.   But there are many other former Phillies players still involved.   Before I pick a name, I might wish to pick my World Series winner and go backwards.

It's Monday and that means it's time once again for a Phillies 97.3 ESPN Monday Mailbag. We take your questions every Monday and then we talk about them during the Sports Bash with Mike Gill on Tuesday afternoons at 2:30 p.m. If you are not in South Jersey, you can listen online at 973espn.com.

Will the injures mean that Nick Williams has a shot to make the opening day roster?
~Bryan Each week, we will take a look at the NBA and the standings--particularly the bottom of them, to rank teams based on their odds to land the number one pick in the draft. They are not necessarily ranked by who is making the most or who should tank the most, but rather the highest odds of landing the top draft pick in the lottery, based on lottery odds.

TANK Power Rankings (based on chances to finish with No. 1 lottery odds)

** = Does not have a first round pick