Jayson Werth Hates the Phillies, His Life, and Yo Mama Too 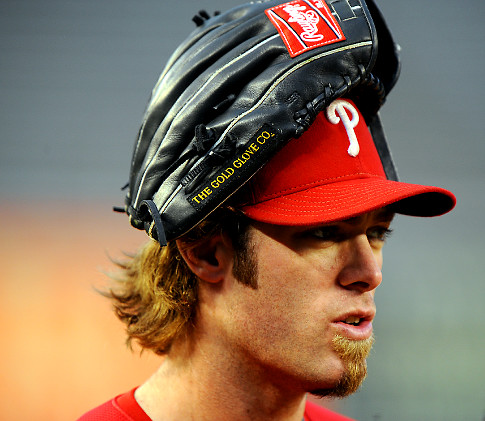 Former Philadelphia Phillies  emergency catcher Jayson Werth, continued to spew venom at the team who gave him a chance to reestablish his career, won him a World Series ring, and made him a millionaire.

Earlier in the day in a piece in the Washington Times, Werth told reporter Thomas Boswell, "I hate the Phillies too," after his general manager Mike Rizzo said that he, too, "f----- hates the Phillies".

But the madness did not end there, as Werth continued to offer jabs.

"They mama so stupid, it takes they two hours to watch 60 minues," Werth said. "And - they mama so fat, they gotta use a baseball bat as a toothpick."

Asked why he hated the Phillies, Werth responded, "Clearly, they caused me to sign with the worst team in baseball...I mean, they could have paid me the same amount of money, but instead chose to spend the money on the best pitcher in baseball.  It's not like he's that good."

"The worst part of it," Werth continued as he took a few more hacks at batting practice, "is that it's not like they even have a blue chip prospect to replace me.  That's some disrespect."

Asked if he had any regrets, Werth responded, "Yeah, that I didn't get to give the city the finger on the way out the door."

Well, Jayson, you have 126 opportunities to do so over the next seven years.  The fans will be ready.

stop trying to make yourself look cool because your not

stop trying to make yourself look cool because your not