Then and Now: Dennis Seidenberg 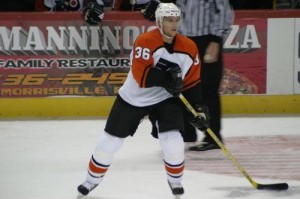 At the time, Bob Clarke's decision to send 24-year-old defenseman Dennis Seidenberg to Phoenix for the aging Petr Nedved was a questionable move. All the Flyers have left from their trade with the Coyotes on January 20, 2006 is minor leaguer Joonas Lehtivuori.

Seidenberg, at the moment, is helping the Bruins try to win their first Stanley Cup since 1970. So just how did the aftermath of this deal transpire?

"Nedved has always been a good scorer and a real good player and we think he'll solve some of our problems up front," Clarke told the Associated Press after the trade back in 2006. Nedved helped to an extent as he posted five goals and nine assists in 28 regular-season games for the Flyers in 2006 adding two more goals in Philly's six-game opening round loss to Buffalo.

In the following season, however, Nedved tallied only one goal in 21 games for the Flyers while splitting time between the NHL and the Phantoms before being picked up off waivers by Edmonton in July of 2007. 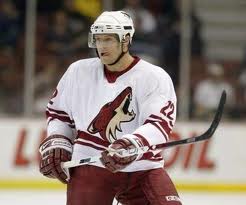 While Philly fans were watching Nedved's career slowly drift over the cliffs, Phoenix fans started catching an early glimpse of the Seidenberg currently paired with Zdeno Chara in Boston. After playing in five games for his home country of Germany in the 2006 Winter Olympics, Seidenberg had a goal and 10 assists in 34 games for the Coyotes while playing strong defense.

Just before the midway point of the 2006-2007 season, Seidenberg was moved to the defending Stanley Cup Champions in Carolina. In need of a defenseman, the Hurricanes sent Kevyn Adams to the Coyotes in exchange for the slowly improving d-man.

"With some uncertainty concerning when our injured defenseman will be able to return, we needed to make this move now," said Carolina General Manager Jim Rutherford, "Dennis will be a good fit for us on defense."

Unfortunately for Rutherford, Seidenberg didn't play that great in his first 20 games for Carolina as he had a plus/minus rating of minus-12, his worst rating at any point in his career.

Despite the ending of the 2006-07 regular season, Seidenberg found himself able to recover in Carolina for the next two seasons.

Seidenberg, a defensive defenseman, had never registered a goalless year when playing more than 10 games in a season for a team. Although he improved his plus/minus by 18 to a plus-6 in the 47 games he played in 2007-2008, Seidenberg didn't score a single goal. Making up for his lack of production, Seidenberg set his NHL career high for assists with 15 and 81 blocked shots.

In the following season, Seidenberg was a crucial piece to a team labeled the 'Cardiac Canes'.  Improving in almost every statistical category, Seidenberg set his personal NHL highs in games (70), goals (5), assists (25), points (30), and blocked shots (160).

Playing in the playoffs for the first time since his Calder Cup run with the Phantoms back in 2005, Seidenberg played in 5 of the 7 games it took Carolina to beat New Jersey in the ECQF. Seidenberg had three assists in the series including the primary assist on Jussi Jokinen's buzzer-beater in Carolina's 4-3 in Game 4.

Facing the top-seeded Boston Bruins in the second round, Seidenberg helped the 'Canes pull off another unlikely victory. Beating the Bruins in seven games, Seidenberg had two assists in the series, including the secondary assist on Scott Walker's series-winning goal in the overtime of Game 7.

The miraculous postseason run for Carolina ended in the Eastern Conference Finals as they were swept by the Pittsburgh Penguins. Seidenberg scored his first NHL playoff goal in Game 2 of the series to give the Hurricanes an early 3-2 lead in the game.

After the season, Seidenberg left the Hurricanes to join their division rival in the Florida Panthers. 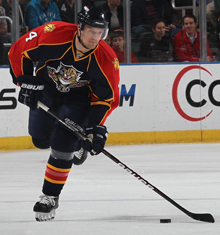 "Dennis is a strong and physical defenseman who is hard to play against," Panthers' GM Randy Sexton told the Panthers' website, "he adds size and speed to our club and helps to solidify our blueline."

Even with such high praise from Sexton, Seidenberg couldn't finish out the season in a Panthers' uniform. After posting two goals and 21 assists in 62 games for Florida, and a power-play goal for Germany in the 2010 Winter Olympics, Seidenberg was shipped up to Boston with prospect Matthew Bartkowski in exchange for Byron Bitz and Craig Weller. 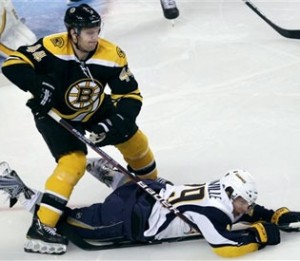 Seidenberg had two goals and seven assists in 17 games for Boston before an injury to his left wrist sidelined him for the playoffs. He finished the season first in the league with 215 blocked shots.

Returning to the Bruins for this past regular season, Seidenberg played a full slate with Boston. Playing in 81 games, Seidenberg scored seven goals and had 25 assists while blocking 174 shots. Taking part in Boston's top defensive unit, Seidenberg helped the Bruins clinch the Northeast Division.

In the first round of the 2011 playoffs, the Bruins faced their biggest rival in the Montreal Canadiens. With the help of a goal and two assists from Seidenberg, the Bruins edged out the Canadiens in a seven game series to face the Flyers in the following round.

Sweeping his former team, Seidenberg had three assists in the brief four-game series. Two of Seidenberg's three assists came in the Bruins' Game 1, 7-3 beating of the Orange and Black.

Moving on to the Eastern Conference Finals, Seidenberg and the Bruins faced the Tampa Bay Lightning. For the second time in three series, the Bruins needed all seven games to move on to the Stanley Cup Finals. Seidenberg had only two assists in the series, but they both came in the Bruins tight Game 2, 6-5 win to steal home ice advantage from Tampa.

Seidenberg has quietly improved his game over the years allowing him to become one of the more reliable defenseman on a team currently fighting for the Stanley Cup. Since his days in Philly, Seidenberg has seen a rise in his ice time/game, shot blocking ability, and physicality. Hopefully he'll be rewarded with something the Flyers haven't seen since 1975.