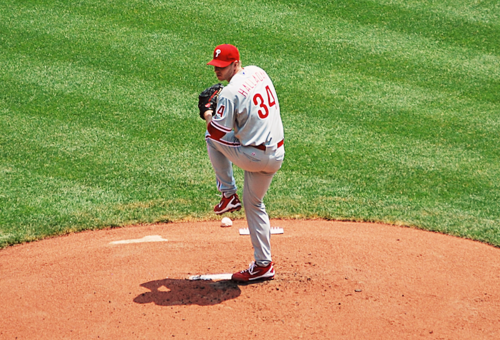 Yesterday's loss was not only annoying, but the game itself was just plain old boring. The Phillies lost the nearly four hour game to the Yankees, 13-9 and brought their Spring record down to 12-15-3.

Today, Roy Halladay (1-1, 5.40 ERA) will make his final Grapefruit League start before he takes the mound in Pittsburgh on April 5th. Halladay had a rocky start to Spring Training, but has eased in to the rhythm. In Doc's last start on Sunday against the Orioles, he threw 6 1/3 innings, allowing two earned runs on seven hits while K-ing nine. Today, he will take on his former-Blue Jays for the first time this Spring. The Phillies are 2-2 against the Jays this Spring.

The Blue Jays will start their ace Ricky Romereo (1-0, 0.00 ERA), who has made just three starts this Spring. Romero has not pitched a Grapefruit League game, but on March 26, he started a game for the Jays' Triple-A squad. In that outing, he gave up four earned runs over 13 its in seven innings of work. Romero, who had not allowed a run before, had struggled with his command. Interesting.

Romero will take on a Phillies lineup that could possibly hold the Opening Day roster (not in this order, though).

In other news: The Phillies have signed veteran infielder Andres Blanco to a minor league contract. Blanco most recently played for the Washington Nationals this Spring, but was released. The 27 year-old is a switch hitter at the plate and is a .255/.301/.333 hitter in 654 big-league at bats over seven seasons. Blanco's last MLB appearance was for the Rangers in 2011.