Eagles Flyers Phillies Sixers About Us Write For Us
Phillies Look For First Win This Spring As They Face The Tigers
Around the Net February 28, 2014: Flyers mauled by Sharks, Rangers next; Trade deadline looms 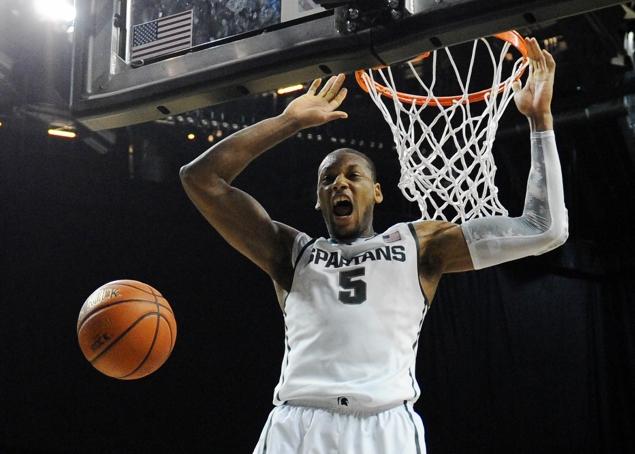 It seems like Adreian Payne has been playing college basketball for six years now. The Michigan State senior, despite suffering a foot injury, is enjoying his most productive season. He is averaging over 16 points per game and 7.5 rebounds on a very good Michigan State Team.

The Dayton, Ohio native has enjoyed a number of big games this season, including dropping 33 points against Texas. Though he’s had games in which he was not scoring particularly high numbers, he never really had any poor shooting games, aside for a 1-for-6 game against Oklahoma earlier this season.

What makes that so incredible is that Payne does not have the body of a jump shooter. Rather, he is a tall, athletic big man with a wingspan of 7'4".

He does use that incredible body to do two things. One is to create shots for himself from the top of the key and wings, where he has space to maneuver. He also used it on defense and is very rangy, given his height and wingspan. Payne is a tremendous defender in the post and protects the rim well.

Otherwise, he is a bit limited as he is still raw. He is still growing both physically and mentally. Physically, he is looking to grow into his frame as Payne stands at only 215 pounds. Once he does, he will become more of a force in the post. At his current build, he’ll be eaten alive in the post when matched up against guys like Serge Ibaka in the NBA.

Mentally, he is still maturing. He is improving his work ethic and in-game motor to play fluently and play hard. Often times, he’ll settle for simply jump shots when he could otherwise get by on moves, seemingly because he wants to move on and get the shot off as soon as possible. This is unacceptable at the NBA. He also needs to develop a better vision of the court.

What gives Payne a big advantage and bodes well for projecting how far he will develop is the fact he already has a perimeter game. Payne already has made 26 three’s this season, and counting, and that gives him more value at the next level as he has another way to score. See Kevin Love.

With his head screwed on right and the right coaches around him, Payne can have a nice career as a pro.

The Verdict: He’s not a lottery pick. Payne will likely fall somewhere in the 20’s in the first round. He’d be a nice player to get your hands on if you are in the neighborhood of his selection. The 76ers could package a bunch of their second-round pics for a late first round pick. This is not as unlikely as it seems, as NBA teams do not like late first round picks because they are guaranteed contracts. If Sam Hinkie could put himself in position to be near him, he’d be a nice scoring complement to Nerlens Noel as a role player off the bench his first few seasons. Plus, Brett Brown is exactly the type of coach that can get him thinking and approaching the game the way he should. Plus, his mental lapses won’t be much of an issue off the bench.