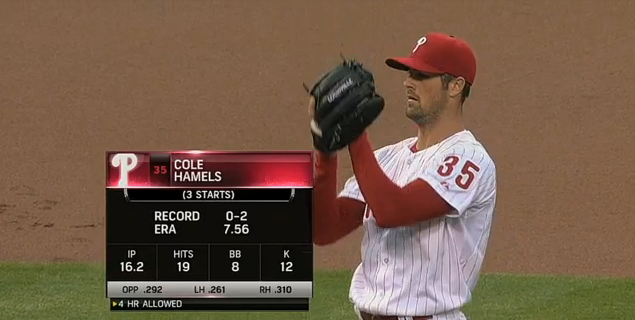 Earlier this evening, our Frank Klose suggested that the Phillies and Padres might be a match in a trade for staff ace Cole Hamels. Since that publication, there has been word that the two teams actually have had talks regarding a trade involving Hamels.

According to Philly.com's Ryan Lawrence, the Phillies have been in contact with the Padres regarding LHP Cole Hamels and newly-acquired OF Wil Myers. With the Padres being one of the most active teams on the market this offseason, another move wouldn't be a shocker.

Cole Hamels noted that he wanted to play for a "winner". Although the Padres missed the playoffs the past few seasons, they have improved their offense with the additions of Matt Kemp, Justin Upton and Myers.

If the Padres are willing to lure the Phillies in with Myers, 24, for Hamels, they will need to include more than just a single OF for the former WS MVP.

Murphy stated that the Padres could have one of the better chances of landing Hamels.

A week ago, the Boston Globe reported the Padres among the teams interested in Hamels, along with the Cubs, Red Sox, Dodgers and Rangers. A potential deal involving Hamels and Myers would seem to make some sense.

Only time can tell what the Phillies will do with Hamels.

We'll keep you updated with this story.