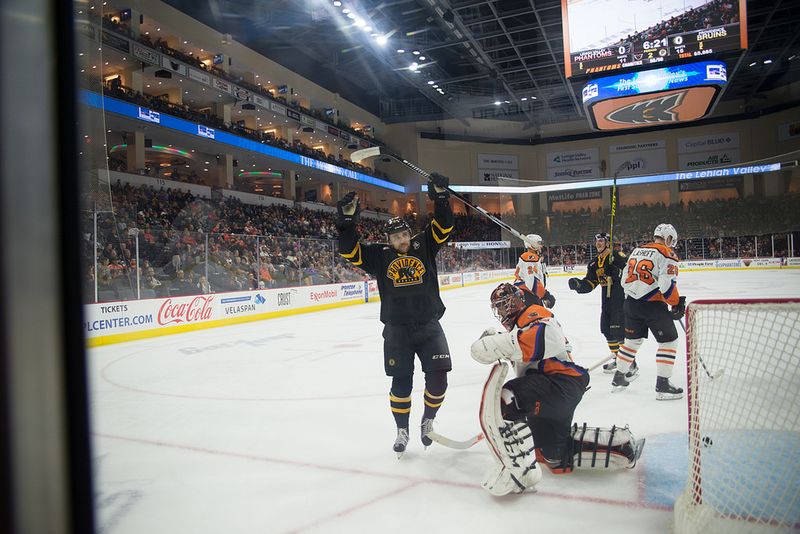 For most of the first period, it was back and forth with very few chances. The Phantoms had just six shots in the period, and two came from Danick Martel for their best chance of the period. With 3:30 left, Martel took a shot in close, picked up his rebound and tried to backhand it home, but Subban slid across to keep it scoreless.

Providence's best chance came a split second before the horn. Colton Hargrove got a rebound in the circle and had Lehigh Valley's Martin Ouellette out of position, but got underneath the puck and put it about a foot high over the net.

In the second, the Phantoms had a great chance just over a minute in, but Jesper Pettersson hit the post. About three minutes after that, Davis Drewiske hit the post from the point.

DeFazio got the Bruins on the board at 13:39, taking a pass from Tommy Cross and picking the glove side top corner. Austin Czarnik picked up the secondary assist. As for the Phantoms, they managed only five shots in the second period.

Providence put the game away in the third with two goals 4:55 apart. Griffith took a stretch pass from Chris Breen, collected the rebound of his own shot and tapped in the easy goal.

To round out the scoring, Anton Blidh scored a strange one. Ouellette stopped Colby Cave and Samuel Morin appeared to pull the puck back under his goalie to get a whistle. However, the puck came right out the other direction to Blidh, who popped the puck in the net.

The Phantoms had a late five-on-three, but could not register a shot.

Notes: Forward Brandon Alderson was recalled from ECHL Reading before the game, while Reading's Cam Reid was signed to a PTO. They both suited up and played. Kevin Goumas, who had been in the bottom six, centered the second line between Petr Straka and Aaron Palushaj. There was no update to the injury statuses of Mark Alt and Kevin Sundher. Meanwhile, head coach Scott Gordon said that the MRI of Anthony Stolarz came back clean and hopefully he can return this coming week.

Quotes: Forward Tim Brent on the overall effort: "It was more of what we were doing. Making slow decisions, not moving the puck quick enough. When we don't do that our speed is nullified. That has to be our game, that's the only way we are going to be successful. We just weren't good enough tonight."

Scott Gordon on why the team came out flat: "I think it was more us. We expended a lot of energy and emotion last night. We just finished up six games in nine days. After the game I've got this disappointment that we weren't able to take advantage of them being on the road and playing the same amount of games and injuries and call ups, but the reality is we didn't have it tonight. They played a little bit smarter than we did and that was enough to make the difference."

Up Next: Lehigh Valley hits the road for a return trip to face the Utica Comets Wednesday at 7 PM.