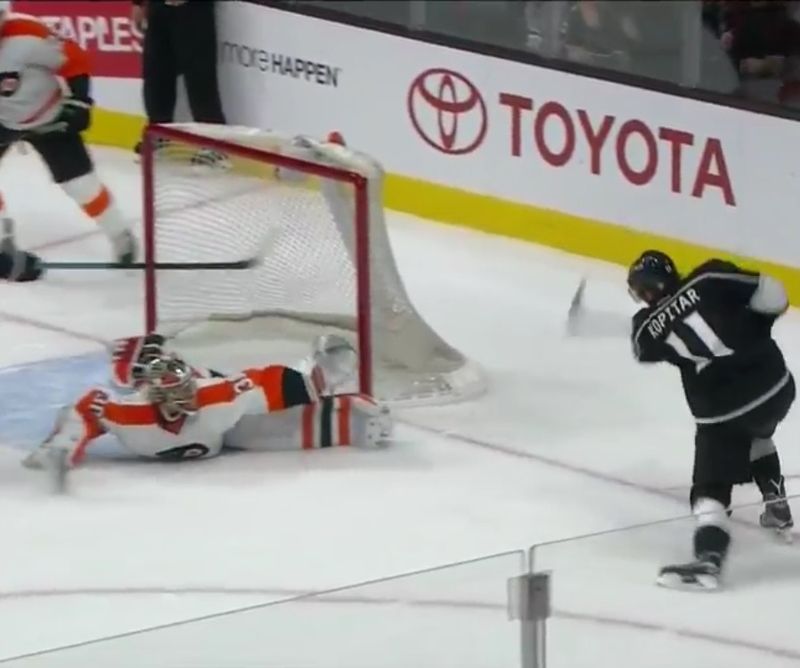 There are two telling storylines to the Flyers West coast trip that has now concluded after Saturday's game against the Los Angeles Kings.

The first is the difference between last season's trip to California and this season's. The Flyers picked up a crucial win in Los Angeles last year, not a close loss. The Flyers also fought back for a point in Anaheim before losing a shootout.

This season, the Flyers leave with nothing. They also have started the post-Christmas stretch exactly the same as last season, leaving almost no margin for error in the rest of January.

When the Flyers traveled to San Jose last season, they had played 59 minutes of solid, hard-fought hockey and were seconds from overtime when a breakdown in the neutral zone allowed the Sharks to claim a last-minute win. The Flyers got no points.

The Flyers did get three points in the remaining two games in Anaheim and Los Angeles.

That was in early December last year, and the Flyers took those two games with points and turned it into a stretch where they earned points in seven of their next eight games, including five wins.

This season, the Flyers key victory happened on Nov. 23, not Dec. 6. The Flyers defeated the Carolina Hurricanes in overtime, and then picked up points in 10 of their next 13 games, including eight wins.

Last season, out of the break, the Flyers returned with an 0-4-1 record. The Flyers are off to a similar start this season, going 0-3-0 on the West coast trip.

All three losses featured common threads. The special teams could not get going at either end. The Flyers allowed six power-play goals and scored only two.

The Flyers consistently lost puck battles, one-on-ones in the corners, turned the puck over at their own blue line and in the neutral. They struggled with controlled entry, good outlets on the exits. They were a discombobulated team for much of the week.

It wasn't until the final period of Saturday's game that they really started to show signs of the team that was rolling into Christmas break. But against Jonathan Quick and trying to rally from a two-goal deficit in 20 minutes, it might as well have been a death sentence. A third period like that in Anaheim or San Jose may have resulted in a couple of points. Not in LA.

But the Flyers now make the return home with the task of finding the formula that had them winning throughout December. They entered Christmas break with 37 points, three more than they had at that time last season. They didn't hit the 37-point mark until Jan. 6.

The Flyers next game is Tuesday, Jan. 5.

So there are some differences. Consider the Flyers lack of games every other day a bit of a blessing. Yes, they have been losing in regulation and yes, they have struggled in doing so. But they have not played nearly as much as they had by this point last season, where the deficit was already reaching unreachable plateaus.

In the grand scheme of things, the Flyers haven't lost any ground in the playoff race. But, in his first season as head coach, you would like to see differences between Dave Hakstol's methods and influence on the team over the lifelessness the Flyers showed under Craig Berube last season. On this trip — with special teams struggles, a slow start from a break and costly turnovers leading to more road losses — the trends all remain the same.

It's still early for Hakstol, but it isn't for these players, who have completely reversed their momentum with three straight losses and no points in a West coast trip.