Gostisbehere ties it late, but Panthers win in shootout 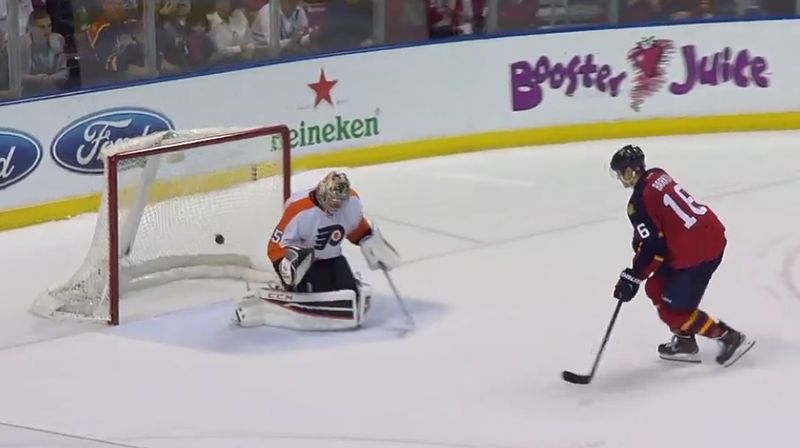 After a dominant effort on Friday led to another win, the Flyers needed to find another gear as they trailed in the third period against another playoff team.

Look no further than the rookie sensation.

But after getting bested on an overtime power play by the Panthers penalty kill, the shootout got the better of the Flyers again as the Florida Panthers managed a 5-4 win over the Flyers on Saturday night at BB&T Center in Sunrise, Fla.

The Flyers and Panthers played an even style, engaging in several puck battles. Midway through the first, it was the Panthers who would strike for the game's first goal.

Off a turnover, Florida formed a 2-on-1 as Reilly Smith carried the puck with Jussi Jokinen charging up the wing. Smith fired a high shot over the glove of Steve Mason for his 22nd goal of the season at 10:22.

The Flyers would answer by creating a turnover as well. Sam Gagner capped a hard-working shift by generating a turnover and centered to Nick Cousins who slammed home his fifth goal of the season to tie things up at 14:36.

It was a similar chess match through most of the season. Finally, a power play chance allowed the Flyers to break through.

A shot from Matt Read was deflected by Gagner and then Ryan White to beat Roberto Luongo and give the Flyers the lead.

That lead was short-lived, however, as just 18 seconds later, Jaromir Jagr powered his way into the Flyers zone, drew the attention of four defenders and centered to an uncovered Jonathan Huberdeau. His one-timer was ripped high over Mason for the equalizer and his 13th goal of the season.

Early in the third, the Flyers would get the edge again.

Evgeny Medvedev, in the lineup for an injured Andrew MacDonald, threw a shot toward the net that was deflected by Michael Raffl to give the Flyers the lead. It was Raffl's 10th goal of the season.

The Panthers first power-play opportunity in two periods would give them the tying goal. Less than 10 seconds into the power play, Aleksander Barkov fired a shot from the slot to beat Mason and tie the game with 11:36 remaining.

Just 1:05 later, a defensive breakdown by the Flyers allowed a 2-on-1 in close and Smith was on the receiving end of a feed from Jussi Jokinen for the go-ahead goal.

It took the Flyers until the final two minutes of regulation, but they finally managed the equalizer. And it was none other than the hometown kid.

Gostisbehere threw a shot toward the goal that made its way through to beat Luongo with 1:55 left in regulation. His 15th of the season forced overtime.

In the overtime, Gostisbehere would draw a penalty to get the Flyers a key power play. Despite tremendous pressure, the Flyers could not score and the Panthers kill helped force a shootout.

The Flyers could not solve Luongo in the shootout while Nick Bjugstad and Barkov struck in the first two rounds of the shootout to give the Panthers the win.

Mason made 25 saves in regulation and overtime. Luongo made 22 saves, plus two in the shootout for the win.

The Flyers closed the gap in the standings to two points on the Penguins, but missed out on the chance to close it to one with the overtime power play.

The Flyers return to action on Tuesday night for a particularly big game. The Flyers host the Detroit Red Wings, who they trail in the standings by three points, at 7:30 p.m.