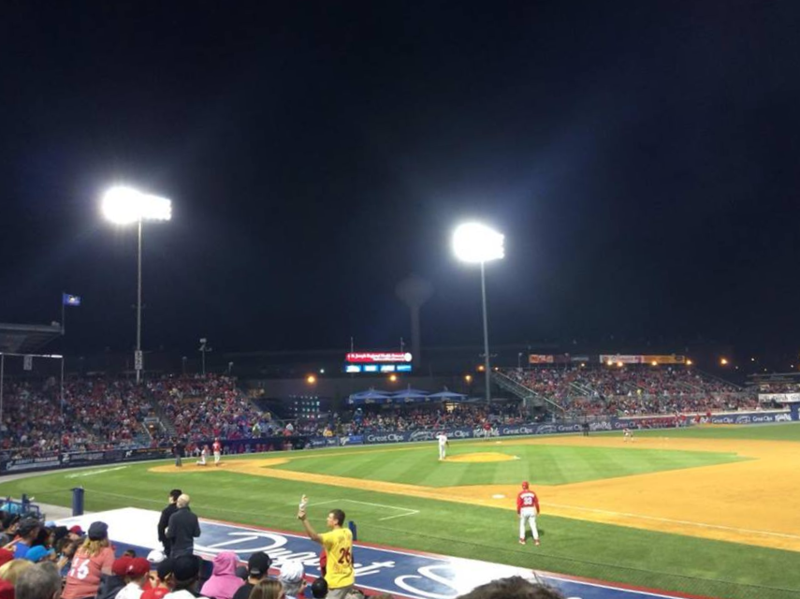 The Philadelphia Phillies and their Futures Team sqaure off at FirstEnergy Stadium in Reading, PA on March 31st, 2016 (Rich Wilkins/Philliedelphia)

Reading, PA - For the first time in 16 years, the Phillies took to the field in Reading, Pennsylvania for the debut of the Futures Game, pitting the big leaguers against some of the organization's top talent, including the likes of J.P. Crawford, Roman Quinn and Nick Williams. Phillies 13th ranked prospect Zach Eflin started for the Futures Team and fell victim to the Phillies offense, allowing 12 runs, nine earned, in the first three innings.

On Friday at Citizens Bank Park, the Phillies will host the Baltimore Orioles for an on-deck matchup before hosting the Futures Team for a nine-inning contest on Saturday afternoon.

The Phillies jumped on Zach Eflin right out of the gates. Cesar Hernandez drew a one-out walk and Odubel Herrera followed with a two-run missile homer off the top of the Wawa sign in right center field to give the Phils a 2-0 lead. Two batters later, Cedric Hunter singled to right and then Darin Ruf reached first on a J.P. Crawford throwing error to put two on with two down. Phillies newcomer Will Venable kept the inning going with a line drive single to left, scoring Hunter. Darin Ruf scored on the play following a series of errors to make it 4-0. Peter Bourjos singled on a fly ball to right, plating Venable, extending the lead to 5-0 to end the first.

After Jeanmar Gomez set the Futures down 1-2-3 on seven pitches, Freddy Galvis led off the second with a towering solo home run to center, putting the game at a 6-0 score. Two batters later, Odubel Herrera and Maikel Franco hit back-to-back one-out singles and following a Cedric Hunter pop out, Darin Ruf sent a line drive three-run homer over the wall in left, making it a 9-0 game after two. The Futures got on the board for the first time in the bottom of the second. Rhys Hoskins singled to lead things off before Dylan Cozens blasted a two-run home run to center field, cutting the big league Phils lead to seven, 9-2.

The big league club piled on some more runs in the third. Freddy Galvis hit an RBI-single to make it 10-2 and Cesar Hernandez hit a two-run homer to extend the lead to 10, 12-2. Roman Quinn led off the bottom of the third with a solo home run to center field for the Futures.

In the top of the fourth, the Phillies tacked on another run. Cedric Hunter led off with a single and scored on an RBI-double off the bat of Will Venable with one down off of Edubray Ramos. In the fifth, Tyler Goeddel, Maikel Franco and Cedric Hunter hit back-to-back-to-back solo homers, making it a 16-3 ballgame. During the bottom of the frame, Phillies top prospect J.P. Crawford went yard for the Futures squad, cutting the deficit to 12.

Ryan Howard played for the Reading Phillies in 2004 and entered the game as a pinch-hitter in the 7th to a heck of an ovation from the FirstEnergy Stadium crowd. He responded to the reaction by hitting an opposite field solo home run to left, making it a 17-4 game. Emmanuel Burriss hit an RBI-single and Carlos Ruiz hit a sacrifice fly to make it 19-4 and that's how it would end.