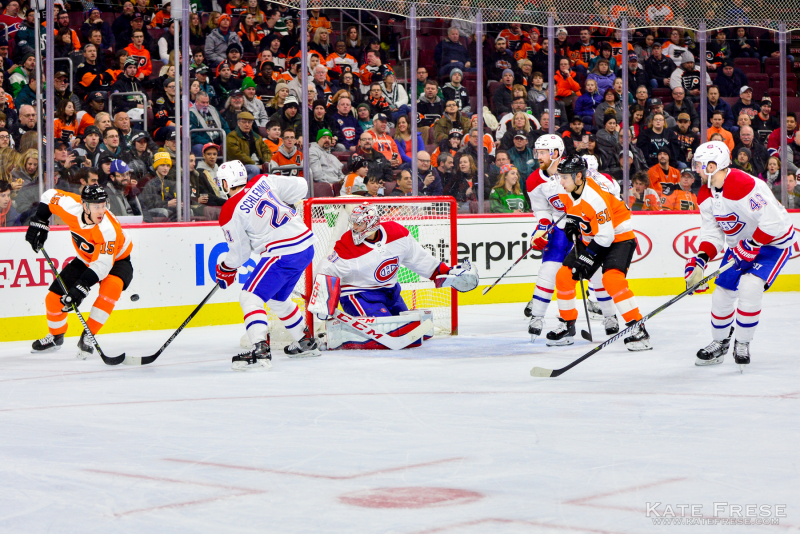 (Kate Frese/Sports Talk Philly)
As the second period began to wind down at Wells Fargo Center, the Flyers looked gassed, and it showed when Logan Shaw scored the equalizer with 71 seconds to go in the period.

Once the puck dropped for the third stanza, though, the Flyers were a new team. Jakub Voracek and Travis Konecny each scored within the first minute-and-a-half, and Shayne Gostisbehere assisted on both goals for a three-assist night to give the Flyers a 5-3 win against the Canadiens.

For Voracek, the eventual game-winner gives him three goals in his last seven games, after snapping a 14-game goalless drought on Jan. 23. For Konecny, it's his first multi-goal game since March of last year. And for Gostisbehere, it's the third time this year he's finished with three helpers, and fourth time overall.

Though the first period ended in a scoreless tie, Konecny got the 2nd period off to a fast start and opened the scoring just 42 seconds in. Artturi Lehkonen followed up with a shorthanded tally, though, but 28 seconds after that, Claude Giroux tallied on the power play to restore the lead. Shaw followed up before the period could end, though, setting up what looked like to be a wild finished before the Flyers could dispel any such notions.

As the Canadiens pulled Carey Price for an extra attacker with less than three minutes on the clock, Brendan Gallagher scored to bring them within one. Ivan Provorov countered with a long empty-net goal from behind his own goal line to replace the two-goal margin, and the Flyers were able to skate away with the win.

In addition to Gostisbehere and Konecny, Giroux finished with a multi-point as well. Not only did he score, he helped set up the first Konecny goal as well as Voracek's.

Brian Elliott turned aside 25 shots, earning his second win since his return from injury. Additionally, he assisted on Provorov's empty-netter, giving him his first point as a Flyer.

Price finished with 23 saves on 27 shots faced. Not his best night in net for the Canadiens.

It was the first meeting between the Flyers and Habs this season, and the first of three meetings this month. The win also gives the Flyers their second consecutive against the Canadiens.

During the first TV timeout in the first period, the Flyers re-aired the final play of Super Bowl LII on the Jumbotron. The Wells Fargo Center crowed, many of which possibly attended the Eagles' victory parade, subsequently erupted in a raucous cheer.

The Flyers next head West for a quick two games, taking on Arizona on Saturday and playing Vegas for the first time on Monday.