Eagles Flyers Phillies Sixers About Us Write For Us
White Sox Enlist Help of Hall of Fame Slugger Jim Thome to Recruit Bryce Harper
Fletcher: ‘I’m Very Fortunate to Walk Into This’

Inside the Diagnosis of a Neurological Condition

Sixers guard Markelle Fultz was diagnosed with neurogenic thoracic outlet syndrome after seeing upwards of 10 specialists about his shoulder. Of course, there remains plenty of speculation as to whether or not this is what is really wrong, if there's a mental side to it too, etc. We've all been through a lot with this Fultz saga and this latest chapter just seems like another odd twist to an injury/condition that started plaguing Fultz at the beginning of the 2017-18 season. Why did it take so long to get here? How could Sixers doctors and so many specialists miss this? Why could Markelle dunk and layup, but not follow through on a jumper?

All valid questions. As someone who has gone through a neurological issue myself, this thoracic outlet syndrome diagnosis looks like the right one...on the surface. The compression of nerves in the brachial plexus causes inflammation, which in turn, affects the motion of your shoulder, hands, upper check and arms. This is a condition that differs from person to person and the same can be said for a number of neurological issues. Often, it is a process of elimination, crossing condition after condition off a list before a diagnosis is reached. That is what happened to me back in late 2014.

This is a different condition that what Fultz was diagnosed with.

Back in October of 2014, I remember being at my sister's wedding. It was a tremendous, happy day and it was so great to have a lot of family and friends to celebrate her marriage. Part of the way through the wedding, I had a little too much to drink and went to the bathroom to...well, you know. Anyway, while I was in the bathroom, i noticed a spot just above my elbow was twitching. Nothing I had ever seen before, but I noticed it and just figured it was due to dehydration.

After the wedding in Philly, I returned to Georgia and the twitch was still persisting, so I decided to look up what it could be and I saw that it could be anything from a vitamin deficiency to Lou Gehrig's disease. Immediately, I was spooked and went to consult a neurologist about it. The first neurologist I saw, in November, did a physical exam, putting me through the battery of tests (walking on your heels, pushing/pulling, etc) to test my strength. My symptoms, at the time, included twitching, some uncomfortable nerve pain in my shoulder and some muscle wasting in my thumb area. The neurologist said that the thumb atrophy was a sign of carpal tunnel, so he gave me a wrist splint to wear for a few weeks in order to see if things improved. At the time, that diagnosis made no sense. I didn't have wrist pain, it mostly coming from my shoulder area..and there was still that twitch.

I moved on to neurologist number two and did the same strength tests, but this time I was given the option of having an EMG (electromyography) test done. This test, if you don't like needles, is not for you. The first part of the test, they place electrode strips on different parts of your body and send shockwaves to check if nerves are being conducted properly in different areas. The second part, the doctor sticks a needle in different muscles in the affected area (and other limbs) to see if the muscle is functioning properly. The first EMG test showed no issues, so I was left with no answers, more questions. I could have moved on, but despite the test not showing anything, I was still experiencing nerve discomfort in my shoulder and muscle wasting in my hand.

Since the first pair of neurologists got me nothing more than a wrist splint, I decided to explore the bone aspect of things and went to go see an orthopedic doctor. There, I had some x-rays taken and it showed some nerve compression in my cervical spine, but not in the areas that would explain my pain or muscle wasting down to my thumb. After getting the x-ray results, the doctor seemed confused at how I was showing some compression in my neck, but with some symptoms coming in completely different areas. He thought, at the time, it was best to do some physical therapy to see if that would help alleviate some of the issues.

I went to physical therapy three times a week for a little over a month and noticed very little improvement in my condition. At that time, the issues were starting to affect me mentally as I was starting to believe that maybe this was something a lot more serious.

In December 2015, I was referred to a neurologist at Emory, who thought it would be a good idea to get a brain MRI. Sometimes, spots on the brain cause muscle irregularities when it comes to vasculitis, multiple sclerosis and migraines. While there were some white spots on the brain, everything else came back clear with no indication that there was anything pointing towards a diagnosis.

When I was home for the holidays, I went to go see some doctors that my parents were familiar with that could potentially ease my concerns and maybe point towards a diagnosis. From around Christmas time through the second week of January, I had a spinal tap done, extensive bloodwork and another EMG. The spinal tap showed nothing and the bloodwork was clean, but the EMG showed chronic denervation in my c7-c8 nerve areas. 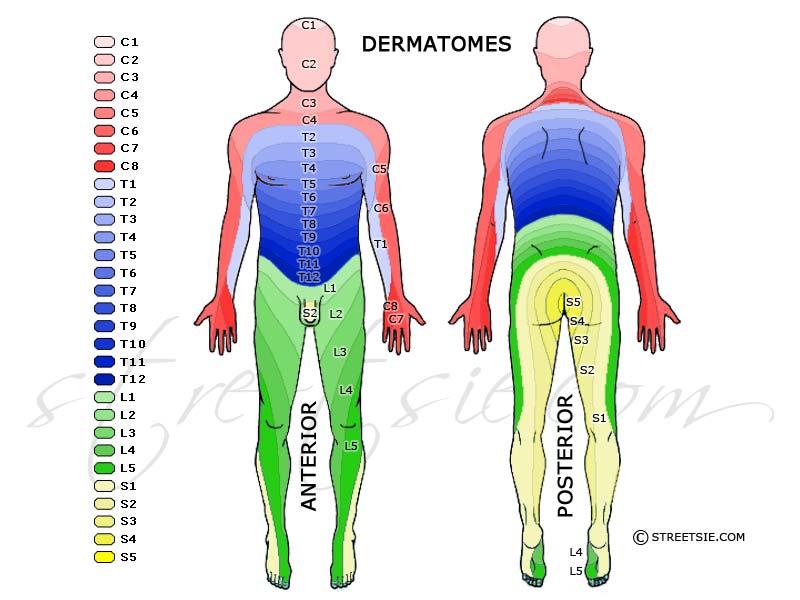 As you can see from the chart, the c7/c8 dermatomes innervate parts of the hand along with the triceps and the back of the arm. The EMG made sense. It showed issues in the areas of my atrophy due to a chronic nerve inflammation issue. While it was good to see that I was completely crazy with regard to what was going on, the fact that the c7/c8 issue showed on the EMG, but not on an MRI, was confusing. This was in January.

In February, my twitching from my elbow extended throughout my arm, causing me to return to one of my original neurologists to see if anything else was going on. Eventually, I was referred to one of the top neuromuscular doctors at Emory, Dr. Jonathan Glass. Glass specializes in the diagnosis of ALS among other disorders, but I was eager to hear what the best of the best had to say about my issues.

After an extensive physical examination that lasted over an hour, I was diagnosed with Parsonage Turner Syndrome, also known as brachial neuritis. The shoulder blade on my left side protrudes and stands out more than usual, which is a sign that points to this diagnosis. The EMG and MRI's showed signs that made sense to a diagnosis like this, and it took 7+ doctors and a hell of a lot of tests to connect the dots. In July 2015, I went back to see Dr. Glass to ensure that there was no further progression of the issue and I was good to go. The incidence of this condition is 1.65 in 100,000. He more or less said at some point in the last 5-7 years (prior to 2015), I had injured the nerves in my shoulder and the chronic damage was just starting to show.

To this day, I still deal with the symptoms of it. I have some muscle twitching and shoulder pain. It's very on/off though. I have exercises that help stretch out the brachial area to keep the inflamed nerves from being compressed, which helps from time to time.

It is worth mentioning too, that throughout the entire process, it screwed with me mentally. At points, I thought that I had a neuromuscular disorder that was terminal. I was living my usual life and then things started happening to my body and I had no idea what it was or what to do. I went to countless doctors who couldn't give a concrete diagnosis and this drove me to need therapy and take some medication to get back in the right head space.

While Markelle Fultz's diagnosis isn't exactly the same, ideally this sheds light on how long it takes to correctly diagnose a neurological condition. The symptoms differ for everyone and can be present one day and not the next day, which makes it difficult to pin point.

Hopefully with this diagnosis of thoracic outlet syndrome, Fultz and the team can finally find a way to get him back to a point where he can play basketball without dealing with neurological symptoms. This whole saga has made a lot of us numb to what happens next, but I think we can all agree that we just want him to get healthy, in body and in mind.

Wow, your story was interesting to read. I've seen quite a few people with neurological symptoms down the arm. In most cases, it seems to be related to the movements and positions of the neck. Every now and then, the symptoms are vague and difficult to diagnose. I have found the McKenzie Method to be a helpful tool to identify what activities aggravate or alleviate the symptoms. I love to hear stories of people who are doing their best to manage because these stories help me connect with clients who deal with similar issues. Thanks for sharing. - Dr. Marc Robinson, PT, DPT, Cert. MDT