Sunday afternoon, the world was given terrible news of a helicopter crash in California. Among the victims of this horrific accident were NBA legend Kobe Bryant, and his 13-year-old daughter Gianna.

The city mourns this loss greatly. As Bryant has many ties to the city of Philadelphia.

His connections to the city started before he even burst on the scene. His father, Joe Bryant, played both college and professional basketball in Philadelphia.

Joe Bryant played college basketball for La Salle from 1973-1975. Then he went on to start his professional career with the 76ers, playing with the team from 1975-1979.

Kobe’s ties to the city began in 1992 when he started his High School career at Lower Merion High School just outside Philadelphia. He would go on to lead them to the state championship in his senior year.

Kobe would then go on to enter himself into the 1996 NBA draft. The same draft when the Sixers ended up drafting Allen Iverson first overall.

Although Kobe was never a fan favorite here, mainly because he led the Lakers to beat the Sixers in the 2001 NBA finals, people always looked at Bryant as a Philadelphia product.

Bryant shared a very special moment in Philadelphia as well. It was before a game against the Sixers, that Kobe announced that the 2015-2016 would be his final season. That night started a league-wide farewell tour for the future Hall of Famer.

The sports world showed endless amounts of love yesterday, paying their respect to Bryant. This included Sixers stars Ben Simmons and Joel Embiid, who always looked at Kobe as an idol. 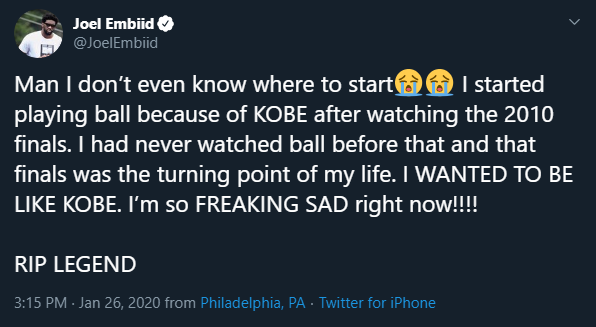 Bryant ended his career a five-time champion, one time MVP, 18-time All-Star, and two-time Olympic gold medalist. He gave everything he had to the game of basketball and for that, his legacy will never be forgotten.

He gave an entire generation someone to look up to and idolize. Along the way giving a perfect example of how to be a fierce competitor and to always strive to become the best version of yourself.

Kobe and Gianna Bryant still had so much to give to the world and the game of basketball. Although they only had 41 and 13 years on this earth, the impact they have left on the game and the people around them will always live on.

“Heroes get remembered but legends are forever”