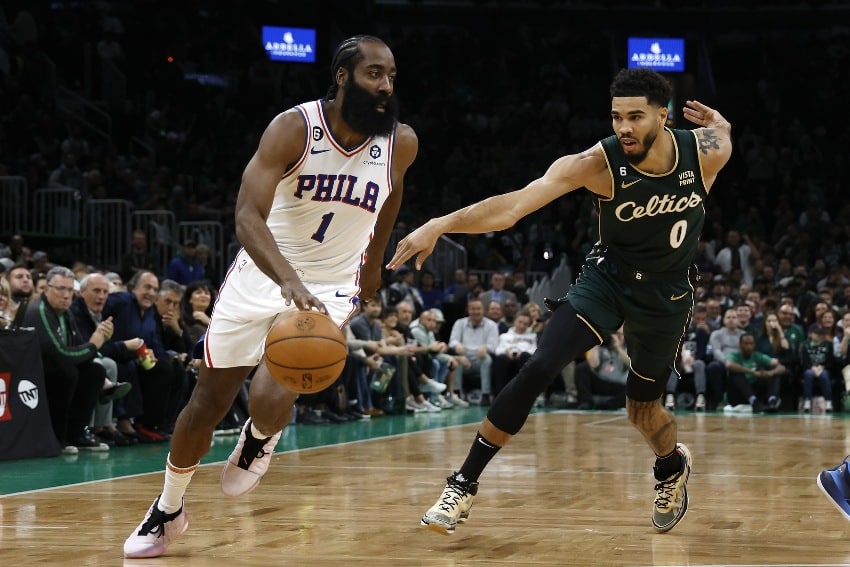 The Philadelphia 76ers dropped their opening night contest to the Boston Celtics 126-117 on Tuesday at TD Garden.

James Harden put together a fantastic performance for the Sixers, finishing with 35 points, eight rebounds and seven assists. The 35 points was the most he scored in a Sixers uniform. He shot 9-of-14 from the field, 5-of-9 from 3-point range and a perfect 12-of-12 from the free-throw line.

However, it was not enough to overcome dominant performances from Boston’s pair of star players. Jayson Tatum and Jaylen Brown each finished with 35 points to lead Boston to the victory.

Joel Embiid added 26 points, 15 rebounds and five assists for the Sixers in the loss.

The Sixers’ home opener is against the Milwaukee Bucks on Thursday night. Here are three observations from the loss to Boston.

The Sixers got off to a slow start against a tough Boston defense. They missed six of their first seven attempts from the field while also committing three turnovers in the first four minutes of action. Their pacing looked off, and Boston took advantage to build a quick 9-2 lead.

The Celtics came into the game with a clear plan to hassle Embiid and make it tough for him when he gets the ball. They did a good job running double teams to him off the catch in the post. He did have some success in getting Boston’s bigs into foul trouble. Al Horford picked up his second foul just four minutes into the game. Backup center Noah Vonleh then committed a foul within his first minute off the bench.

One of the bright spots for the Sixers in the game’s opening minutes was the play from Tobias Harris. He scored the team’s first points of the game, tipping in his own miss on an aggressive drive to the basket. He also had a good finish in transition, and showcased his quick trigger from beyond the arc by knocking down a triple with the defender closing in. His scoring played a big role in helping kickstart the team’s offense, helping them go on a 13-2 run midway through the first quarter.

With the score tied at 15 with 5:10 remaining in the first quarter, head coach Doc Rivers decided to mix things up. Embiid went to the bench, and Harden stayed on the floor. The results were fantastic. Harden took over, scoring 12 of the team’s final 14 points of the quarter. He knocked down a step-back 3-pointer and did a superb job of getting to the free-throw line. His ability to draw fouls remains one of his best attributes. He finished the first quarter with 16 points, including knocking down all eight of his attempts from the free-throw line.

Offense stagnates in second half

The Sixers went into halftime tied with Boston 63-63. Harden scored 22 points, the team got to the free-throw line 17 times and Embiid showed signs of heating up late in the first half.

The Sixers offense, due mainly to the success they found when going to the Harden-Embiid pick-and-roll, managed to mostly keep pace with the Celtics through the opening four minutes of the second half. However, the Sixers began to get sloppy offensively. Both Embiid and Harden committed careless turnovers resulting in easy fast-break points for Boston. The Celtics took a 90-78 lead with 3:49 remaining in the third quarter on the back of an 8-0 run. Embiid and Harden committed turnovers on consecutive possessions during their run.

Boston’s offense, powered by strong performances from Tatum and Brown, caught fire in the second half. They shot 57.5% from the field and 40% from beyond the arc in the second half. Once they built up that 12-point lead, the Sixers did not have any success consistently getting stops and scores to try to get back in the game.

Harden put together a great performance leading the Sixers offense. He drew a ton of fouls, drained multiple of his patented step-back 3s, showcased his improved explosiveness on a drive and finish past Grant Williams and knocked down multiple mid-range pull-up shots. However, the team’s second-half offense relied a bit too much on Harden playing in isolation. There were far too many turnovers and instances of players standing around. While Harden can win in isolation at times, playing that style of basketball is inefficient and unsustainable in the long-term.

Some of their best offensive possessions in the second half came out of pick-and-roll actions. The Harden-Embiid pick-and-roll is lethal, and it is something the team needs to go to far more often than they did against Boston. Tyrese Maxey, who finished with 21 points on 8-of-16 shooting, also showed some flashes. Nine of his points came in the fourth quarter when he went on a brief scoring flurry in an attempt to get the Sixers back in the game. Getting Maxey the ball more often should be a priority for the team moving forward.

Embiid, while having a good night on the glass, did not have good touch from beyond the arc (he shot 1 of 6) and struggled to control the basketball. He committed six turnovers, with part coming from good Boston double teams and part coming from being careless or trying to force things in the second half. He, as well as the rest of the team, has a lot of things to clean up on from opening night.

The Sixers’ offseason additions received a lot of hype in the weeks leading up to the start of the regular season. Through one game, the results have been subpar. Before diving in, it is just one game, far too small a sample size to make any long-term conclusions.

Montrezl Harrell was the first big man off the bench. He struggled on both ends of the floor, scoring only two points while failing to grab a rebound in 11 minutes. Rivers stuck with him the entire night as Paul Reed did not see any time on the floor. It would have been nice to see Reed get a crack in the second half since he brings more rebounding and defensive prowess. Rivers mentioned previously the backup center minutes will be divided up based on matchups. Expect to see a mixture of the two moving forward.

P.J. Tucker made some nice plays, but the team will likely need more from him. He knocked down a triple from the corner and had a few solid defensive possessions on Tatum. His final stat line consisted of six points and four rebounds. A lot of his production will often not show up in the box score.

The remainder of the bench did not produce much at all. De’Anthony Melton, Georges Niang and Danuel House Jr. combined for just nine points on 3-of-10 shooting. Matisse Thybulle barely saw the floor and Shake Milton did not get any action. The Sixers’ bench was outscored by Boston’s bench 34-11. The Sixers will need a stronger performance from a seemingly much-improved bench unit as the season moves along.