3 Observations: Sixers Get First Win Behind Strong Performance From Harden 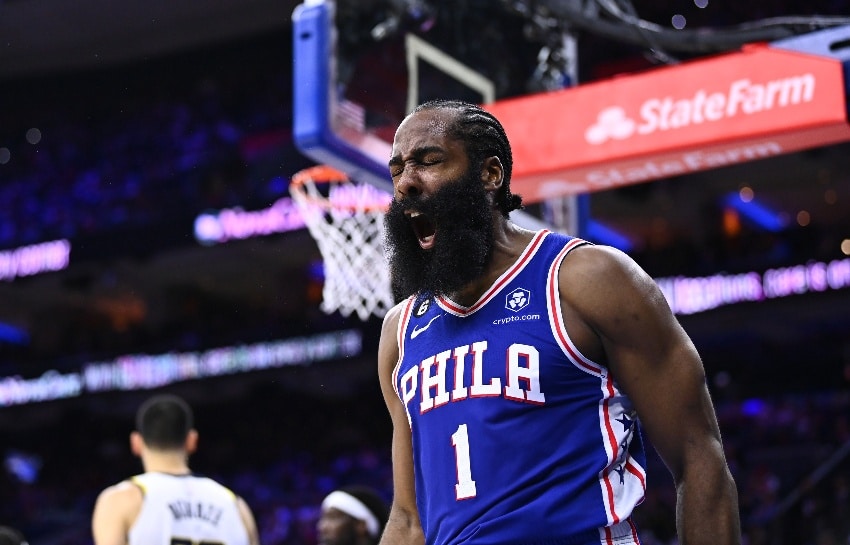 It took until their fourth game of the season, but the Philadelphia 76ers finally are in the win column. The Sixers defeated the Indiana Pacers 120-106 on Monday night at the Wells Fargo Center.

James Harden led the way, nearly finishing with a triple-double. He finished with 29 points, nine rebounds, 11 assists and two steals.

Next up for the Sixers is a pair of road matchups with the Toronto Raptors, beginning on Wednesday. Here are three observations from the win.

One of the reasons behind the Sixers’ 0-3 start to the season has been a stagnant offense. The team has relied too much on isolation basketball and not enough on pushing the pace and spreading the ball around. It was clear early on the team was putting a ton of focus on those areas against the Pacers.

The Sixers’ second basket of the game came off a beautiful pass from Embiid, who found Harden on a back cut for a dunk.

Embiid also found Tyrese Maxey on a back cut on the following possession, although Maxey’s layup attempt was blocked. Embiid did not look to score much in the first half, going into halftime with just nine points. However, he made a much bigger impact on the game in the second half. He scored 17 second-half points while doing a solid job of attacking the smaller, weaker Pacers big men.

The Sixers averaged 29.7 shots from beyond the arc in their first three games of the season. They nearly matched that number in the first half alone, taking 26 3s and connecting on nine of them. They finished the game shooting 19-of-43 (44.2%) from 3-point range, by far both their highest and most efficient output of the season.

Tobias Harris showcased his quick trigger from 3-point range, setting a new career-high with 10 attempts from beyond the arc. While the shots were not going in during the first half (he shot 2-of-7 from deep in the first half), it was good to see him not shy away from pulling the trigger on open looks. He knocked down a big 3 with 6:23 remaining in the third quarter that halted an 11-2 Pacers run.

Sixers bench has best performance of the young season

The Sixers came into the game averaging dead last in bench points, averaging 11.3 bench points per game. What was seemingly a much improved bench unit was not playing up to expectations. However, the Sixers bench blew away their previous performance by scoring 18 points in the first quarter alone.

Montrezl Harrell was first to check in off the bench, coming in for Embiid with 6:17 remaining in the first quarter. He was the beneficiary early on of the Sixers pushing the pace, drawing multiple fouls after sealing off the lane and receiving a Harden pass on the fast break. He also made a nice play defensively, blocking a Bennedict Mathurin layup attempt late in the first quarter.

The headliners of the Sixers’ big bench performance were Georges Niang and De’Anthony Melton. Niang made plays on both ends of the floor, draining multiple 3s, recording a steal and drawing a charge. The 3-point shooting is what Niang is known for, but his defensive impact against Indiana is something the team would like to receive from him more often. He finished with 13 points while connecting on three of his six attempts from beyond the arc.

Melton had his best game in a Sixers uniform, finishing with 11 points and five rebounds while shooting 3-of-6 from the field. This is closer to the version of Melton the team expected to receive when they traded for him during the offseason. He has the length to be disruptive defensively while having the ability to be a versatile offensive player.

Before emptying their bench in the final two minutes of the game, the Sixers ran an 11-man rotation. Of note: Matisse Thybulle was not a part of that rotation. He did not see the floor until the bench was emptied. Shake Milton received his first minutes of the season, coming into the game early in the second quarter. He played six relatively uneventful minutes. Paul Reed received the majority of the backup center minutes in the second half. He made an immediate impact defensively, recording both a steal and a block in nine minutes.

The Sixers built up a 90-76 lead through three quarters, but they struggled to put Indiana away for good. The Pacers managed to stick around throughout the third quarter, and a Chris Duarte jumper cut the Sixers’ lead down to 10 points with 10:43 remaining in the fourth quarter.

At that point, the Sixers brought Harden back into the game. He was well on his way to another strong performance, and his play in the fourth quarter continued that. On the first possession after coming back into the game, Harden drilled a step-back 3-pointer. A few minutes later, with the Sixers up by eight, he went on a run that all but sealed the game for the Sixers.

With 6:38 remaining in the fourth quarter, Harden knocked down a mid-range step-back jumper to put the lead back up to 10 points. On the following two possessions, he drained a pair of step-back 3s that culminated with this play that got the Wells Fargo Center crowd onto their feet.

This play opened up the lead to 109-95 with 5:21 left to play. A few minutes later, the lead ballooned up to 119-101. All the starters were done for the night with two minutes remaining.

Harden scored 11 points in the fourth quarter on his way to helping the Sixers to their first win of the season. His play against the Pacers is yet another positive sign of his return to being the dominant player he was during his days with the Houston Rockets.