Lidge 3-6 weeks from throwing, Contreras to Close, James not a fan of Special K cereal 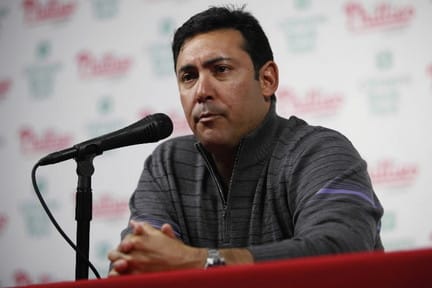 Some big news came out of CBP tonight, as the Phillies prepare for the first of two On-Deck Series games.

Not good. We already knew that Lidge would begin the season on the DL, but this report is ominous. If Lidge doesn't throw for 3-6 weeks, his return could be 5-10 weeks away. He could be placed on the 21-Day DL, but the 60-Day DL (8.5 weeks) is certainly not outside the realm of possibility. Given the strength of The Rotation, the Phillies' other bullpen options, and the relative ease of the early-season schedule, the Phillies seem to be in good shape to survive without Lidge. It is better than Lidge miss time now, than at the end of the season. But they are a better team with him, and the sooner he gets healthy, the better.

Manager Charlie Manuel indicated that Jose Contreras would likely begin the season as the closer.

The first thing to remember is that the bullpen situation is a fluid one. Manuel implying that Contreras will be the closer, with the season opener still three days away, doesn't necessarily mean that Contreras will close on Opening Day (or at any point, after that). But, taking Manuel at face value:

The best move might have been to refrain from announcing a closer, and simply let the game situation dictate bullpen use. But this might be as close as we could hope to get to that strategy.

Finally, some good news on the Utley Front. It's good to hear that he is able to field ground balls sans chair. However, he has missed all of Spring Training, and his DL stint could be lengthy. While Amaro has indicated that he doesn't plan to place Utley on the 60-Day DL, that still seems the most likely scenario. Like Lidge, the Phils are better off with Utley missing time now. However, watching Luis Castillo and Wilson Valdez man Utley's position in the interim is not going to be very enjoyable. Utley's ability will, hopefully, be better-appreciated, upon his return.

Charlie Manuel indicated that he expects Ben Francisco to be the primary right fielder.

Were you expecting Ross Gload? (If you were, I hope you are in my fantasy league. And have Contreras on your roster.)

Matt Rizzotti cleared waivers, and was outrighted to the minors.

It seems surprising that Rizzotti cleared waivers, but with teams currently determining their Opening Day rosters, it was a good time to sneak him through. (I think I would have risked Brian Schlitter, rather than Rizzotti, as Schlitter had already passed through MLB in mid-February.) The Phillies now have an opening on the 40-Man roster for Luis Castillo, without needing to place Lidge or Utley on the 60-Day DL.

It's surprising that James would be willing to go on the record with information that may be damaging to his prospect status. It is rumored that Frosted Flakes are his cereal of choice, but those rumors have yet to be substantiated.