What if a Phillies fan Won the MLB Dream Job?

(This contribution comes to us from Mike Frohwirth, who envisions what the MLB Dream Job experience might be like for a rabid Phillies fan.) 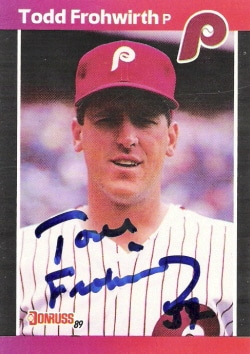 3/25 I'm going to write some notes on this private blog, so I can chronicle the experience. Could be book-worthy! Still can't believe I won the Dream Job! Lots of paperwork to sign. Contract is backloaded, so I don't flee before the season ends.

3/26 Like the setup here. Huge wall of televisions, to watch all the games at once, a treadmill, a closet full of MLB apparel. Possible vlog topic: How long does it take to immolate a Jeter shirt?

3/27 Problem. Guess some marketing plans have been squelched by the fact that I am a non-drinker. Marketing dude not pleased. Content and legal reps seemed OK, though. Sober blogger> non-sober blogger? None of them had heard of Pelle Lindbergh, either. Strange. Let's sell some Aquafina, people!

3/28 Set up my MLBlog. Decided to call myself "MLB Fan Zero." Kept my "About me" section fairly brief. Put a bunch of "Top 3" lists. Maybe some Shadow Gallery and 18 to Life fans will be created. My 3rd favorite MLB team? The Portland Thinkers.

3/29 Practice for on-camera spots. Had to make several wardrobe changes, repeat a bunch of baseball names/terms, for "overdubs." Hope I never actually need to say "Tagg Bozied" during the regular season. Getting Twitter accounts ready. A little nervous about my first interviews.

3/30 One day away! Thinking of my main objectives. Would like to push some saber further into the mainstream. (BABIP stats on mlb.com?) Use my reach to generate some funds for charity. Position myself to find my next job, hopefully consuming more baseball.

3/31 Opening Day in MLB. No Phillies game, though. Watched live baseball from 1:05pm, until 11:36pm, tweeting the whole way. Watched replay of Angels-Royals afterwards, while I blogged out. That Royals team is putrid. Glad I was getting paid to watch them!

4/3 MLBN spot went well. Talked Buchholz, Hamels, BABIP. Announced that I was about to "release the McCracken" before starting Hamels defense. Guess that was funnier in my mind.

4/4 Getting more people to sign up for MLBlogs. Need to drive more traffic to the site. That's why I'm getting the big, back-loaded bucks.

4/5 Mets. A candidate for relegation? Or contraction?

4/6 Letterman. He had a snowball on his desk. Knew immediately that a Santa would be interrupting the interview. Stereotypes. Brought David a box of Tastykakes. Butterscotch Krimpets.

4/7 Lunacy. A pallet of Tastykakes delivered to the FanZero Zone. They're perishable, so I'll donate most of them. Might swim in them, Scrooge McDuck style, first.

4/13 First interview subject: Joe Morgan! Wasn't nervous, as I was focused on using the word "consistent" as much as possible. Asked him why he didn't embrace saber, but he didn't really answer, and the exchange was left on the cutting room floor. Cool '93 Phillies anecdotes. Interview went Tremendously well.

4/19 Twitter war with Jiwan James. He refused to accept the cereal superiority of Special K. Jiwan's palate is strictly AA-material. Kellogg's brought me a bunch of boxes. MLB bigwigs not pleased. Warned not to endorse products.

4/29 Interviewed Roy Halladay! Awesome. Has not been to the Philadelphia Zoo yet. Brought a Chooch Pillow. Wonder how much we can auction that for?

4/31 Apparently, a Chooch Pillow is worth $4351 on the open market. Roy's going to pick the charity.

5/9 Filming at Yankee Stadium tomorrow. Get to field some ground balls at SS, during a vlog. Pretty cool.

5/10 Today could have gone better. I was fielding grounders, and Jeter came out to give me tips. Even with my newly-acquired Tastykake-gut, I have better range. Kind of just waved him off. Probably should not have mentioned that I'd call him if I needed any mansion-building advice. Might be banned from Yankee Stadium.

5/11 Yep. Banned from Yankee Stadium. Kind of got the idea that there wouldn't be many more personal appearances in my future.

5/24 Found out the "my" v-logs are being made combining my previous footage. Weird. Must sound like I am narrating ransom notes.

6/17 The Flyers won the Stanley Cup tonight. While they raised the Cup, I was trying to watch 11 MLB games. Guess I'll buy the DVD.

7/2 Attacked by most of the Twitterverse. Explained Oswalt's high ERA a result of unlucky BABIP and LOB%. Told by 30,000+ Tweeters that I was "making excuses." Might have Tweeted some things I shouldn't have. Control is not my strong suit.

7/3 Mob outside. From the hats, I see at least 21 fanbases are represented. Guess I'll be ordering in today. MLB is "going to take care of Twitter for me, from here on out."

7/17 Mob still out there. Still no Royals hats. Almost as bad as when Sober Valley Lodge got overrun last month. What's up with society these days? Maybe Dutch was right about 2012.

7/23 Sister got married today. Watched Rays beat Royals, 18-2. Scoreless inning by Lorenzo Cain. Might be the best pitcher in the Greinke trade.

8/9 Two plus two makes four. Sometimes. Sometimes they are five.

tortures of the damned!

September the 2nd Royals won again!! I have always been a fan of the Royals!! They have definitely been the biggest story in MLB this season!! And their merchandise is 20% off at MLBShop, for a limited time!!