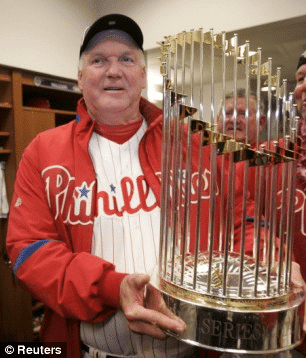 Joe Blanton is not exactly off to a great start. In Tuesday night's 7-4 loss to the Nationals, Blanton allowed five runs, in six innings. His ERA is an unsightly 10.45. But after two starts, it's too early to worry about the veteran northpaw. A .429 BABIP (league average BABIP is~.300), and a 49.5 LOB % (league average LOB % is ~70%) imply that Blanton has been unlucky. His current xFIP of 3.33 implies that he has pitched better than his results indicate. Hopefully, Blanton will see some BABIP/LOB regression to the mean in the near future. 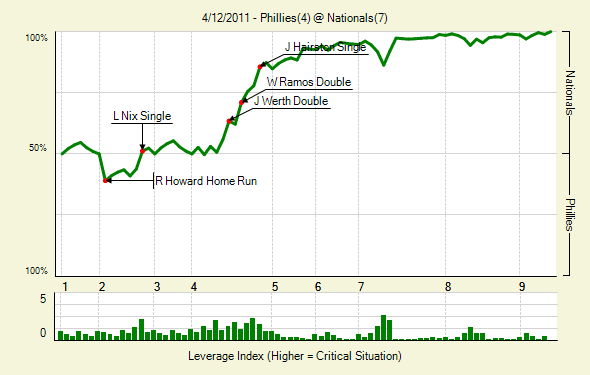 The turning point in this game was the fourth inning, when the Phillies' Win Expectancy dropped from 44.1% to 15.2%, as the Nationals took a 4-1 lead. The Phils would fail to increase their Win Expectancy for the remainder of the game.

Batting Francisco fifth prevents the opposition from being able to use the same left-handed reliever to face Howard and Ibanez, without having to deal with Francisco. Given that Francisco is outperforming Ibanez currently, he should probably always be batting higher in the lineup.

It was too early in the game to consider a reliever. Against the bottom of the Nationals' order, Blanton needs to do better.

Entering the top of the seventh inning, the Phillies trailed, 4-1. With the tying run at the plate, and one out, right-handed batting Wilson Valdez faced right-handed pitcher Livan Hernandez, in a 1.45 leverage situation.

The way the Phillies' lineup is usually set up, the eighth spot (Valdez) and ninth spot (pitcher) are prime pinch-hitting territory. The large majority of the team's pinch-hitting appearances should be for this segment of the lineup. Manuel's bench options include a capable right-handed hitter (John Mayberry, Jr.), a capable left-handed hitter (Ross Gload), a backup catcher than he won't use to pinch-hit (Brian Schneider), and weak-hitting Pete Orr (RHB) and Michael Martinez (BHB). With only two good pinch-hitting options, Manuel has to choose when to use them carefully. Valdez is much weaker against lefties, than he is against righties, but neither Orr and Martinez are more than a slight upgrade against lefties.

With the pitcher on deck, Manuel was reticent to use one of his two good pinch-hitters to bat for Valdez, as he knew that he would be need to use one next. Manuel didn't want to exhaust his only two worthwhile pinch-hitting options in only the seventh inning. While that thinking is understandable, I don't think it is correct. As the tying run was on deck, you need to go with one of your sluggers, rather than GIDP-master Valdez. With the righthander Hernandez on the mound, Manuel probably should have batted Ross Gload here. Fortunately, Manuel's decision to let Valdez bat worked out, as the second basemen singled.

After the game, Manuel indicated that he batted Mayberry, Jr., because he felt that the young outfielder had a better chance of a game-tying homer there. However, all he needed there was a two-run single, and to turn the lineup over to the top of the order. Gload would have been a better option.

In the ninth inning, with the Phillies trailing 7-3, Wilson Valdez was allowed to lead off the inning against left-handed reliever Sean Burnett.

This late in the game, Manuel probably should have batted for Valdez. Assuming Manuel was saving Ross Gload to bat next, Pete Orr and Michael Martinez may have been superior options to Valdez, at least against a southpaw. Valdez faced Burnett, and singled.

Against a left-handed reliever, Gload is a better choice than Martinez. Against a right-handed reliever, Gload is a better choice than Martinez. The only possible advantage to this move would have been if Martinez had forced the Nationals to counter with Storen, as the top of the Phillies' order matches up better against Storen. However, Martinez is not enough of a concern to warrant a pitching change. Martinez grounded out, Burnett stayed in the game, and the Phillies lost. Ross Gload, the Phillies' best pinch-hitter, never got a chance to bat.