New Stat Proves Kyle Kendrick Might Not Be Bad at Baseball 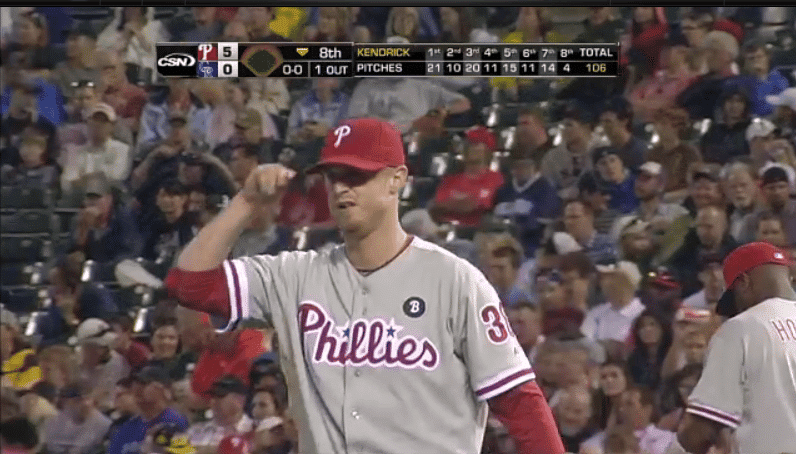 That post title doesn't seem too believable, does it? If there's one topic that pretty much all Phillies fans can agree on, it's Kyle Kendrick's suckitude. Last night, I was in a NE Philly bar, and met a gentlemen who thinks differently. After some conversation, he indicated that he was an analyst for the Phillies organization. For anonymity purposes, we'll call him "Boros McVracken." Here is what I remember from our conversation:

MIKE: Wow, you work for the Phillies?

BOROS: Yes. It's not as exciting as it sounds. I look at numbers, and I make suggestions.

MIKE: Do the Phillies have a lot of analysts?

BOROS: Mr. Amaro has us work independently, so that we don't influence each other's work. He sends us information from other analysts, when he deems it appropriate. I suspect there are hundreds of us, maybe more. But I am not certain.

MIKE: So, you must be a big baseball fan then?

BOROS: I was…once. (takes a drink)

MIKE: Umm, OK. Well, if the Phillies have so many experts analyzing their decisions, how is Kyle Kendrick still on the team.

BOROS: Kendrick is a valuable asset. Perhaps in ways you are not yet ready to understand. (takes drink) What do you think is the best statistic for measuring a pitcher's performance?

MIKE: I guess xFIP is the best now.

BOROS: You'll have to explain xFIP to me. We have our own statistics, and our own acronyms.

MIKE: Well, FIP measures what a pitcher's ERA should have been, with league average performance on balls in play. It takes into account things within the pitcher's control, like strikeouts and walks. Then xFIP was created, and that adjusts for pitcher's home run rate, which isn't stable from year-to-year. So, xFIP is the best stat we have for predicting pitcher's future performance.

BOROS: Very rudimentary. Do you still add in a constant, so that xFIP looks like ERA? We have no need for such constants. (takes drink) Those statistics leave much to be desired. One of the statistics we use is called HAFD, which has far superior predictive capability.

MIKE: What does HAFD stand for?

BOROS: It doesn't stand for anything. Several years ago, we used a statistic that we called HAPP. We called it HAPP because it didn't satisfactorily explain J.A. Happ's success. Mr. Amaro prefers that everything is fully explained. Adjustments were made to HAPP, and the current iteration of the stat is known as HAFD.

MIKE: So, you use HAFD to decide on trades and signings?

BOROS: Becoming wedded to a single metric is folly. Using only one stat is something the New York Mets would do. Actually, Mr. Amaro has at least one of our statisticians embedded with the Mets, so I know for a fact that's what the Mets do. It's not a good stat like HAFD, either. How do you think they wound up overvaluing Oliver Perez to such an extent?

MIKE: How do you figure out a pitcher's HAFD?

BOROS: If I wanted to explain it thoroughly, I'd spend the rest of the night talking about Markov chains. The key is using what you know, and using that knowledge to determine future statistical properties. We actually know quite a lot. Much more than you can ever imagine. (takes drink) If you want to learn more about Markov chains, you can watch me try to walk home in a bit. (chuckles at his own joke)

MIKE: If you know so much, how did Raul Ibanez get signed for three years, and $31.5MM?

BOROS: According to our calculations, he will easily exceed $31.5 MM in value.

MIKE: Remember when Cliff Lee was traded to the Mariners, for three prospects? How can you explain that?

BOROS: Easily. There was a fourth team involved, but they backed out. (takes drink) Mr. Amaro was not pleased. He didn't say anything, but you could see it in his eyes. We now have analysts who have a sole function, to find ways to hurt that organization. God only knows how many analysts Mr. Amaro has working within that team's very offices. (takes drink) Mr. Amaro can be a very powerful enemy.

MIKE: OK. Kyle Kendrick. There is simply no way you can excuse his presence.

BOROS: Kendrick consistently underperforms his HAFD, and every other metric we use. Everything we have predicts he will do better. Mr. Amaro expects our projections to be accurate for a specific population. That population is "every-player-ever." Kendrick will be on the roster until we determine that his performance isn't likely to improve.

MIKE: Wow, so Kendrick might actually get better. I can't wait to write about this on my blog, Philliedelphia.

BOROS: (eyes wide with terror) Philliedelphia? Mr. Amaro is well-aware of your blog. He spoke of your letter yesterday. (stands up) He can never know I spoke to you. (begins screaming) I don't want to go back to the dungeon! Baez wasn't my fault! (stumbles drunkenly into the night)

MIKE (to self): Craphead. I should have asked him about Wilson Valdez…