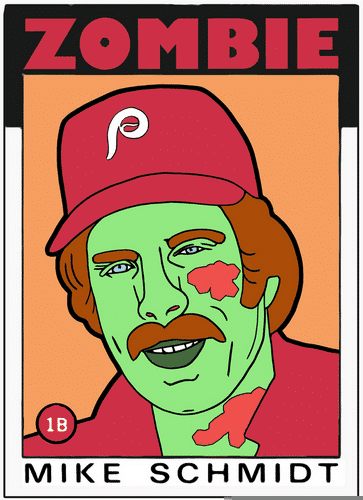 Most Phillies fans have spent hours upon hours envisioning what their favorite players will look like, after the Zombie Apocalypse. In the case of Mike Schmidt, that question has finally been answered. Now we can focus on imagining Zombie Ricky Otero. (Art by Jeremy Scheuch, via Hardball Talk)

I still visit this website every day, just in case… (RIP, The Fightins)

Not unlike Ben Francisco, this site gets better every day. If you are not visiting Fangraphs several times each day, you are doing the internet wrong. Today's gem: improved box score action!

The Wall Street Journal photoshopped some pictures of Phillies fans, to support the argument that Phillies fans don't hate the Mets any more. Seems like sufficient proof to me! (via Deadspin)

I'm pretty sure the 2011 Phillies rotation doesn't need a snappy nickname. But if it does, "The Dubee Brothers" is probably not the best choice. (ESPN)

As the Phillies have the night off, you have a great opportunity to enjoy some minor league action.