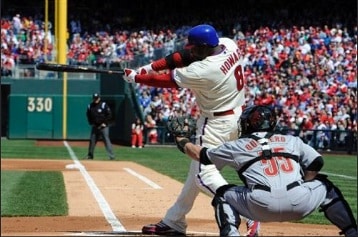 Roy Oswalt kicked off the end of this three game series against his old team, the Houston Astros this afternoon at Citizens Bank Park. Thankfully, we didn’t need little Roy to play left field in this game, and we didn’t need Raul Ibanez to cover first base, either.

Roy only allowed one base runner in the first inning, a single hit by Hunter Pence. But once again, the Phillies’ bats came to life in the first inning, first with Polly drawing a walk, J-Roll hitting a single to right, and then Ryan Howard going yard into the Phillies’ bullpen. 3-0 Phillies at that point. Ben “Benny Fresh” Francisco also launched one into left field for a solo shot, 4-0 Phillies.

In the second inning, Roy Oswalt fanned three, but couldn’t strike out the side in order, due to Chris Johnson’s double off of the left field wall.

In the third, what else would you expect the Phillies to do other than hit, hit, and hit some more? Polly led it off with a double to center, followed by Jimmy Rollins hitting another single, and Ryan Howard doubling off of the scoreboard in right field, scoring Polly.

Roy Oswalt allowed a homerun in the fourth to Hunter Pence, and that was the only run that would score for the Astros in that inning. Ben Francisco caught a fly ball right in front of the scoreboards in right, and while slamming into the protective fence, he managed to knock down the “SD” for San Diego off of the scoreboard. He laughed afterwards, and the fans cheered like crazy.

Some tweets following that play:

“Would anyone miss San Diego? Nah.”

“It’s a shame that he didn’t destroy the sign that says ATL, that would have been fitting.”

Roy Oswalt only pitched for six innings, and his line looked like this: 5 hits, 2 runs, 2 earned runs, 1 walk, and 6 strikeouts. Shane Victorino pinch hit for Roy in the sixth, and boy was everyone excited, especially me, I clapped for a solid two minutes. Shane hit into right to score Ben Francisco who had previously singled. Michael Martinez singled for his first major league hit, and scored Carlos Ruiz who had walked prior to Shane Victorino’s at bat.

The bases were loaded in the sixth after Enerio Del Rosario entered the game to replace Bud Norris, and walked Jimmy Rollins, but Ryan Howard lined out to second basemen Bill Hall, and the inning was over.

No runs were scored in the seventh or eighth inning, thanks to righty relief David Herndon who allowed just one hit.

In the ninth, Kyle Kendrick came in to complete the sweep…that’s right, Kendrick. He walked Brett Wallace to kick off the inning, then allowed a single to Chris Johnson, but thankfully, Jimmy Rollins turned a double play to get the first 2 outs of the ninth. After a pop-up, that was it, the Phillies swept the Astros in their opening series, winning game number three 7-2.

The Phillies have an off day tomorrow to rest up before starting a three game home series on Tuesday against the LOLMets. Cole Hamels will take the mound for the Phils.