Eagles Flyers Phillies Sixers About Us Write For Us
Mets Run All Over Hamels, but Phillies Prevail in the End
A Look at Ugly Phillies Alternate Caps Throughout the Years (Update) 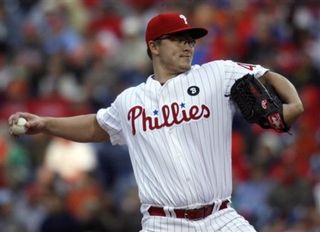 The Phillies still won the series by taking 2 out of 3 after the Mets avoiding a sweep. You may need to know: if you remember at this time last year we were losing series against the Mets, however, this year it’s change, Phillies have taken all 3 series so far.

The Mets pounded on Phillies rookie pitcher, Vance Worley for eight runs (eight runs, five earned) in the first two innings, while Jon Niese lasted through 6 1/3 innings and only one run tallied against him was unearned.

Placido Polanco’s run-scoring single in the third put the Phillies on the scoreboard with the bases loaded. I guess we did not take advantage of the bases loaded situation with no out. But we did get a run in. However, SS Jose Reyes had an RBI triple in the fifth against Kyle Kendrick as the Mets take the lead to 9-1.

Raul Ibanez crushed his seventh homer of the season in the eight inning. Buchholz allowed three runs in that inning before being relieved by Pedro Beato. Rollins greeted Beato with a line drive down the right-field line, but was thrown out by RF Jason Pridie when he tried to stretch the single into a double. That ended the threat in the eighth as the Mets lead was cut in half, 9-4.

In the ninth innng, Beato allowed an RBI double to Ben Francisco before striking out John Mayberry Jr. to end the game.

Oh by the way, former Phillies pitcher JA Happ hit a homerun against the Dbacks.