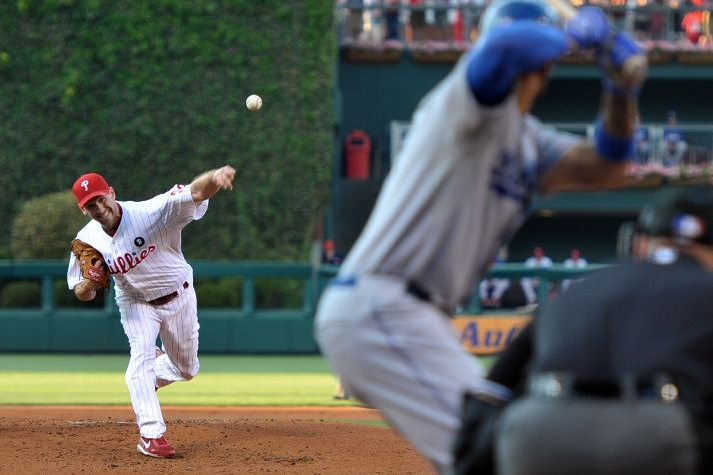 Davey Lopes, Rod Barajas, and the rest of the Los Angeles Dodgers are here to visit for three games, this one starting Cliff Lee and Ted Lilly, both are lefty's. Dom Brown started in right field tonight for his first start against a lefty in his career in the majors. A move that we've all been waiting for Charlie Manuel to make.

The game was scoreless until the bottom of the third when the Phillies got things going. Wilson Valdez started off the inning with a lead off double. Cliff Lee moved him over to third on his sacrifice bunt (let him hit, Charlie!) and Shane Victorino was walked afterwards. Placido Polanco dropped in a single to score Wilson, and Ryan Howard singled to score Shane. 2-0 lead in the third.

In the sixth inning, Cliff struck out the side on 10 pitches, all strikes, making his strikeout total reach 10 tonight, the sixth time this season that he has struck out 10+ batters.

In the seventh, the Dodgers recorded their seventh hit of the night, a single hit by Tony Gwynn. Tony didn't make it past first base as Cliff Lee retired Jamey Carroll. This was a big inning for Cliff, because it was his last. His line from tonight: Seven innings, seven hits, zero runs, one walk, ten strikeouts. Tossed 117 pitches, 80 for strikes.

After a quick 1-2-3 inning from young, filthy Antonio Bastardo, the Phillies scored another, Carlos Ruiz doubled to deep left to score Chase Utley. With a 3-0 lead going into the ninth, Ryan Madson came in to close it out.

Here's a matchup to forget: Ryan Madson vs. Juan Uribe. Juan singled to right, and was replaced on the bases by Tom Gordon's son, Dee Gordon, who was appearing in his first major league game. Dee flew around the bases, nearly invisible, and came around to score on Andre Ethier's groundout. Madson got Barajas and Navarro to strike out to end the game. Phillies win, 3-1, Cliff gets the win, Ryan gets the save.

So, the Phillies still have the best record in baseball, Cliff Lee leads the majors in strikeouts with 100, and game two of this series includes a Roy Oswalt-Rubby De La Rosa matchup. Rubby is making his first major league start tomorrow.