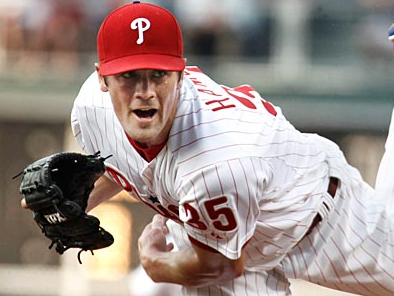 Cole Hamels threw eight shutout innings tonight against the Dodgers at Citizens Bank Park, fanning nine in the process. While the Phillies again failed to give him much offensive support in the process (like Hamels' start in Pittsburgh last Friday night), two runs were enough to seal the deal.

Howard, who has been struggling at the plate, blasted a solo shot to right in the sixth off of Kuroda to give the Phils a 1 – 0 lead. They tacked on another run in the seventh after Shane Victorino tripled to the right field gap, and scored on an RBI groundout by Domonic Brown. Brown was batting second, instead of his usual seven spot, and went hitless, dropping his average to .263.

Ryan Madson came on in the ninth to remain perfect on the season and nail his 14th save of the year. Wilson Valdez and Michael Martinez went a combined 1 for 7 tonight filling in for Jimmy Rollins and Chase Utley. While Rollins was still unable to play because of his right knee bruise, Utley "needed a blow" after starting for five consecutive days.

The Cubs come to town tomorrow to begin a four game series.