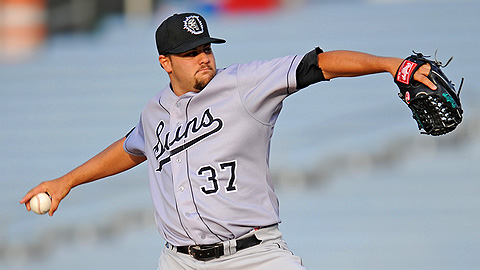 Though the bats stayed hot, and the Fish hit another three home runs, the team couldn't overcome another rough outing by Javier Vazquez, and they dropped game two of their series with the Diamondbacks, 9-5.

Well, that winning thing was fun while it lasted. If the Marlins could erase the fourth inning of the game, we'd be celebrating a victory right now. Unfortunately, according to Bud Selig's voicemail, there is no instance in Major League Baseball where the deletion of an inning from existence is allowed. Crap.

The Outlook-
The last time these teams met, the Fish were in second and right on the Phillies heels'. Now, a Josh Johnson and Hanley Ramirez DL trip later, they're 7.5 back, and go into this four game set playing for maybe their division life.

The Prediction-
The Marlins just lost their series to the surging D'Backs, and in doing so blew up their bullpen. They send just one A List pitcher (the Phillies send three), and don't even know who's throwing one game. So how can they win this series? Well, they can, but I'm doubtful.
PHILLIES 3 OF 4.
Topics
Uncategorized