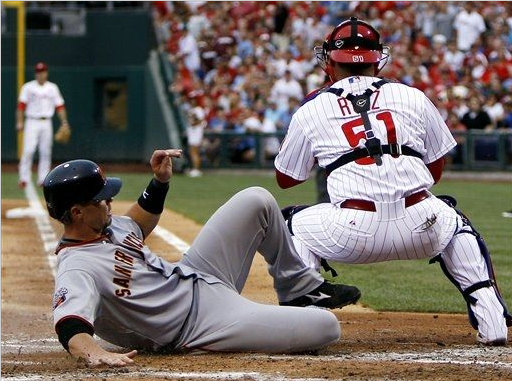 Last night's game was what I was hoping to see a repeat of tonight. Nope. The Phillies' bats just weren't as lively. Apparently, neither were the Giants' gloves tonight, seeing that the only run of the game for the Phils scored on account of an error and an Aubrey Huff mishap in the same inning.

The Giants struck first in this game on Aaron Rowand's RBI triple in the third inning. Another run wouldn't score until the seventh inning; Nate Schierholtz doubled to score Jeff Keppinger. 2-0 Giants.

Matt Cain was pitching like it was the postseason of 2010. He has won a regular season game against every National League team not named the Phillies. That changed tonight as he pitched a masterpiece against the Phils. He allowed one unearned run (Dom Brown singled in the seventh, scored Shane from second) on four hits, walking one and striking out one in seven innings.

Hamels struck out six in 7.2 innings, followed by a lovely strikeout from Lidge which ended that seventh inning. Young, filthy, big-butted Bastardo tossed a scoreless ninth, striking out two.

The Phillies could not come back against…*cringes*…Brian Wilson, who saved it for Cain. Giants win this one 2-1. Kendrick tomorrow against Vogelsong or Lincecum, depending on how Tim is feeling with that food poisoning.