Series with San Fran Not As Giant As You Think 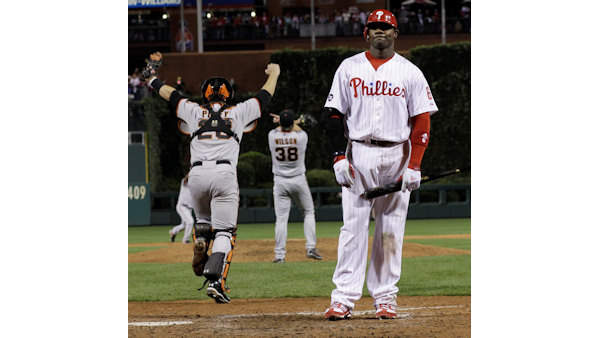 The Phillies are opening a ten-game homestand tonight with the San Diego Padres, but the real highlight of the homestand comes next week when the defending World Series Champions are in town for a rematch of the 2010 NLCS. The picture above should give everyone the unwanted reminder of what happened the last time these two teams faced each other. The San Francisco Giants are the only National League team the Phillies haven’t played this season, so this is a much awaited series, but with it only being the end of July, this is not as big a series as you think.

For one, look at the expected pitching matchups. Vance Worley, Cole Hamels, and Kyle Kendrick are scheduled to pitch for the Phillies. Tim Lincecum, Matt Cain, and Ryan Vogelsong are expected to pitch for the Giants. Both rotations could be greatly different come October. Lincecum and Cain are among the Giants’ best, but nowhere to be found are Jonathan Sanchez, who is out with injury, or Madison Bumgarner. The Phillies are also choosing not to move starters up, meaning no Roy Halladay or Cliff Lee in this series either.

The Giants are also battling injuries. As of right now, Pat Burrell, Miguel Tejada, Freddy Sanchez, Mark DeRosa, and Buster Posey are all out on the DL. Tejada is the only one of those not with the Giants during the NLCS last season. All of them, with the exception of Posey, who was ruled out for the season after a violent collision with Scott Cousins of the Marlins, should be back for any potential playoff match.

The problem with this series, the Phillies’ June series with the Red Sox, and any series with the Braves leading up to the Postseason is that they aren’t the Postseason. The Phillies will play several teams that are expected to make the playoffs, and that could be potential foes in a playoff series. The fact still remains that only four teams can make the playoffs, and that despite the Giants being one of those expected, it would likely leave the Phillies to face the winner of the NL Central before facing either the Giants or Braves in the NLCS, assuming the Giants win the NL West and the Braves take make the Postseason as either the NL East Champs or Wildcard winners.

That’s also two months and 65 games away, and even then, we have no way of knowing anything more than we do now. The rest of the season is so unpredictable, and so much can happen between this three-game series and the Phillies’ season finale against the Braves on September 28th that there is just no way to predict anything.

What I’m mainly saying here is that for every time someone says that a series is a “playoff preview” or the even more popular “World Series preview” used when the Red Sox were in town, it is used far too loosely. This is merely a series in July, and what happens now will likely have little effect on everything else the season has to hold for the Phillies. It will certainly be a classic series, with excitement from beginning to end. But, should the Phillies lose it, it won’t be the end of the world.