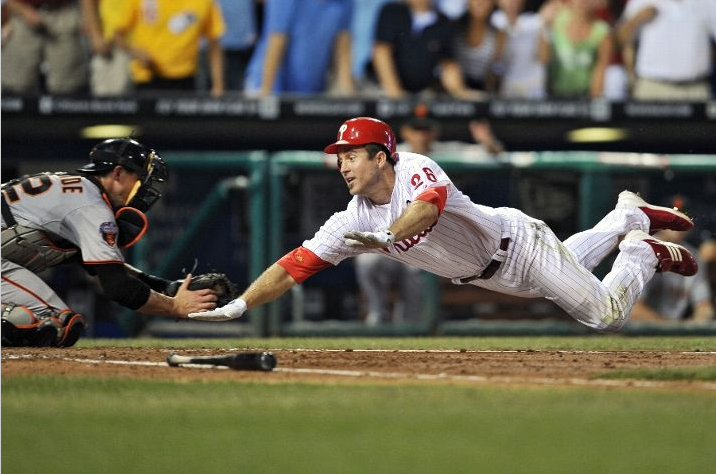 Oh, man. OH, MAN. This game was just exciting to watch, especially because of the smack-talking Giants fans who could have sworn that their team would win this game! Oh, how they were wrong. Not only was their ace starter, Tim Lincecum, scratched from tonight's game with the flu, BUT, Vance Worley (who, might I add, is straight up dealin' right now) started for the Phillies. Two downsides for the Giants.

The first inning was concerning from the start after the Giants took a 1-0 lead on Pablo Sandoval's sacrifice fly. But, Raul Ibanez capitalized with a three-run home run, right after Chase Utley had scored from first on Ryan Howard's double.

John Mayberry homered in the fourth to left field, which gave the Phillies a 5-1 lead.

The real fun came in the sixth when Chase Utley hit one off the wall in left-center field, sending him all the way home for an inside-the-park home run. Begin the cases of heart failure spreading throughout the Delaware Valley.

Not done just yet, Ryan Howard launched one to dead-center into the ivy in the eighth to give the Phils a comfy 7-2 lead.

As for Vance Worley, well, he pitched his first complete game of his major league career. He did so striking out five, walking one, and tossing only 114 pitches. What a game for the youngster.

Tomorrow, it's the other youngster Cole Hamels against Tim Lincecum (I'm assuming.)