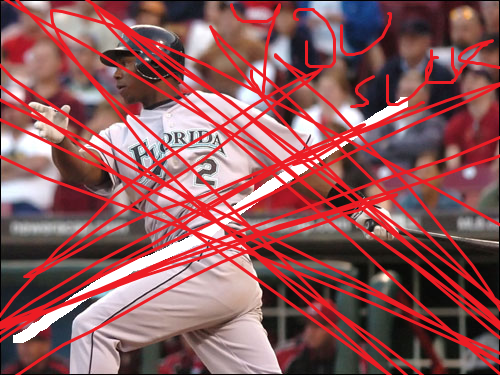 OK – usually I'm lazy and never write anything except stupid tweets, but this really has me angry.

There is a really talented player for the Marlins named Hanley Ramirez.  They have an owner named Jeffrey Loria (not to be confused with Philadelphia Eagles owner Jeffrey Lurie.

SO – since this Loria took over:

~ Joe Girardi was fired for telling Loria to butt out of his managing, including some issues with one Hanley Ramirez.  Girardi was promptly hired by the New York Yankees and won a World Series his second year.

~Fredi Gonzalez was fired for benching Hanley Ramirez after he lollygagged on a ground ball.  Can't mess with Hanley.   He is now manager of the playoff-bound Atlanta Braves

~Edwin Rodriguez serves as interim manager of the Marlins.  They spend an offseason trying to find someone who wants to manage for Leffrey Loria and no one wants to, so Rodriguez starts a second year.   A few months in,  he decided to abandon the ONE chance he had of being a manager rather than put up with the nonsense of managing for Loria.

Something's wrong with the Florida Marlins, and it has nothing to do with Logan Morrison or Wes Helms; ditto Rodriguez, Gonzalez, and Girardi.   I'm just glad they are in the Phillies division to forever be horrible.

PS – I would take Wes Helms on the Phillies' bench right now.  He's not a starter, which was unfair of the Phillies to expect of him in '07.  But he would be good now on a bench that could use a RH bat.  He really is one of baseball's good guys.