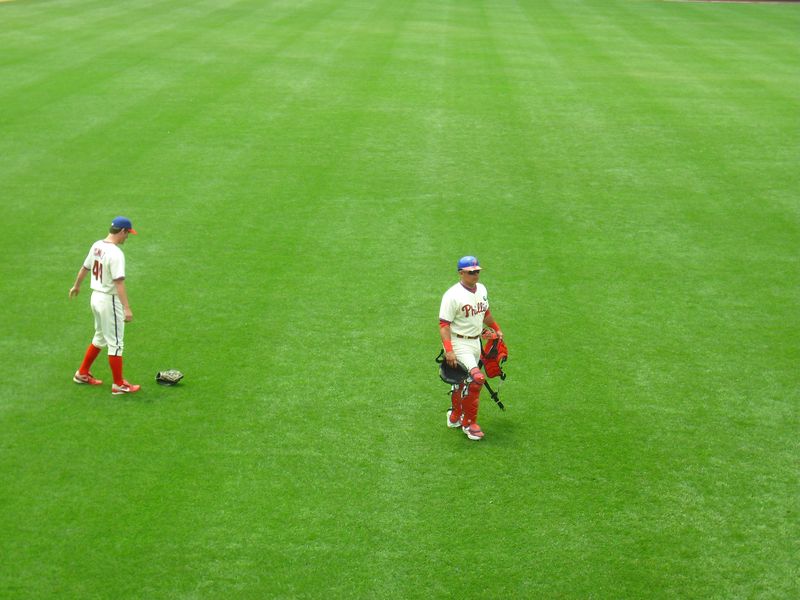 Face it, last night's loss was embarrassing and you know it. I was sleeping while the Madson meltdown inning was going on, but in my mind I sensed that the Phils were in trouble, and immediately wanted to head for the hills and call myself a Braves fan (I hope you're not taking me seriously). As crazy as that ninth inning was, it was just one loss.

The game would remain scoreless until the fourth inning when Wilson Valdez tripled to deep right, scoring John Mayberry Jr. and Carlos Ruiz.

In the sixth inning, Hunter Pence led things off with a solo home run, his fourth in a Phillies uniform. Following that, Mayberry and Ruiz both singled. Valdez grounded into a force out, and Mayberry was out at third. Roy Oswalt hit a sacrifice bunt, loading up the bases on what turned out to be an infield single. Jimmy Rollins came up big, singling to score Ruiz and Valdez. Phillies 5, Nationals zip.

Roy Oswalt pitched what I believe was his best game of the season, going eight strong innings, not allowing a single run. He only walked one batter, and struck out nine, which is the most strikeouts in a Phillies uniform for Roy.

Michael Stutes came in to finish what Roy Oswalt started, and did so perfectly, striking out one batter, Jayson Werth. Phillies take game two, 5-0.