This Day in Baseball History 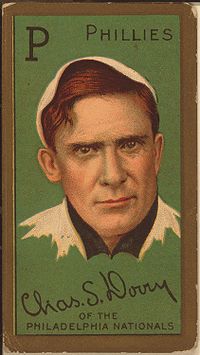 On this date, Mike Lieberthal surpasses this gentleman to the left, Charles Sebastion "Red" Dooin, as the Phillies' all time leader in games as a catcher.

Dooin caught 1,124 games for the Phillies from 1902-1914. He is also credited as being the first catcher ever to wear shin guards.

Oddly enough, Dooin was only a .240 career hitter, and had only 10 career home runs. Somebody get this man some steroids. Where is Mike Jacobs when you need him?

Lieberthal went on to catch 1,139 games for the Phillies.

But I have a bone to pick with Mike. He was a fan favorite here, of course, and I loved him as much as the next guy. Yet he was the only Phillies player to snub me for an autograph at spring training, the very same year he broke Dooin's record. He literally stood 3 feet in front of me on the field doing nothing for an hour before warming up and refused to sign for anyone. I am such a crybaby.

That spring training wasn't a total loss for me, though. I went on to get autographs from Charlie Manuel, Bobby Abreu, David Montgomery and (EEWWWW) Abraham Nunez and Alex Gonzalez.

Other stuff to happen on this date in history: in 1982 Pete Rose surpasses Hank Aaron as the all time leader in plate appearances (13,941 at the time) and in 1998 Greg Maddux wins his 200th career game.

That's it and that's all for now folks, @Phils08champs signing off.

View All Posts By Patrick Franklin

View All Posts By Patrick Franklin