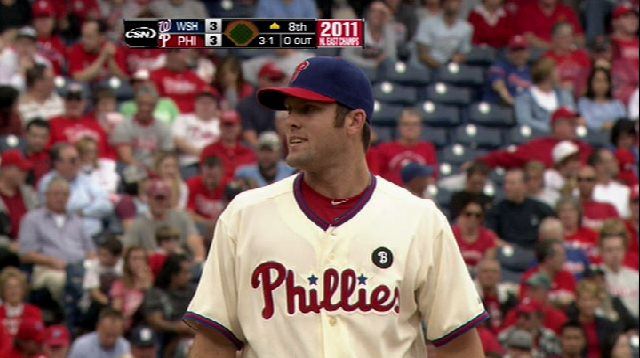 In game one of today's doubleheader against the Nationals, Kyle Kendrick took the field with a lineup of Victorino, Valdez, Mayberry, Pence, Francisco, Kratz, Orr, and Martinez behind him. That wouldn't remain the lineup throughout the entire game, some of the guys certainly needed a breather today (Utley, Rollins, Ibanez, Chooch), and Ryan Howard is nursing a sore heel/ankle after getting a cortisone injection yesterday.

After six innings of zilch, Kyle Kendrick's afternoon was complete. He struck out four and allowed four hits in his outing. Tommy Milone also allowed just four hits against the Phils before being removed in the seventh inning.

Hunter Pence singled in the sixth inning, but was replaced by Brandon Moss after limping down the line. Brandon Moss remained in the game at right field. John Mayberry moved to center field from first, as John Bowker replaced him.

In a scoreless game, Michael Schwimer stepped on the hill. He allowed two singles and a fielder's choice, leaving two men on for Roger Bernadina, who took Schwimer deep to the second deck in right field. 3-0 Nats.

Pete Orr and Michael Martinez singled to lead off the inning in the seventh. Carlos Ruiz was removed as a pinch hitter for Raul Ibanez, who tied the game on a three-run blast to right field. It was his 20th of the season.

Joe Savery made his Major League debut this afternoon. He allowed a hit and recorded one out before Brad Lidge came in and struck out Jesus Flores to end the inning.

Ryan Madson pitched a quick 1-2-3 inning in the ninth. The Phillies could not come back and headed to extras.

Michael Stutes came in for the tenth, and walked two while allowing a run to score on one hit. The Nationals took a 4-3 lead, and won the game following the scoreless tenth by Drew Storen.