Phillies Fall to Cardinals 4-2 in Extra Innings, Magic Number Down to One with Braves Loss 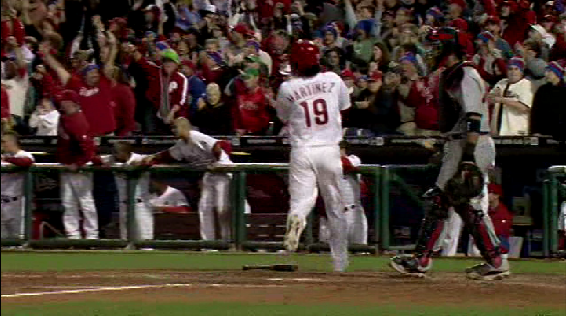 Martinez scores the tying run in the ninth inning

The magic number is down to one after the Phillies fell to the Cardinals in the first game of this series in extra innings. H0wever, the Mets defeated the Braves tonight, 11-2, which brought the magic number down to one. Thanks, Mets!

The Cards took an early lead in a messy inning from Vance Worley in which he walked three batters, walking in a run in the second inning. John Mayberry, Jr. just couldn't have that though, and doubled in Placido Polanco from second to answer the Cardinals' run.

The game would remain tied throughout the rest of Worley's outing. He pitched six, allowing one run on six hits, walking three and striking out five. David Herndon loaded the bases in the seventh inning with one gone, but made it out alive on a 5-4-3 double play.

Antonio Bastardo, whose confidence is down, was brought into this game for God knows what reason. With one gone, Yadier Molina hit one right against the foul poul in left field, putting the Cardinals up 2-1. So frustrating.

In the bottom of the eighth, Hunter Pence hit one of the longest and highest foul balls that I've ever seen in my life. It was at least 20-feet to the left of the pole in left, hooking as it sailed in the night sky. So. Close.

After a scoreless ninth from Lidge, Ryan Howard came in to pinch hit, and doubled to keep the game alive. Michael Martinez pinch-ran for him. Carlos Ruiz doubled to score Martinez, tying the game at two. CBP went nuts. After Gload struck out, they went into extra innings.

Ryan Madson pitched a perfect top of the tenth. The Phillies couldn't come up against Kyle McClellan, and they went to the eleventh with Schwimer taking the hill.

Rafael Furcal doubled and was sent to third on a groundout. Chambers singled and scored Furcal, it was Chambers' first big league hit. 3-2 Cards. Tyler Greene doubled over the head of Michael Martinez, scoring Pujols. The ball actually rolled on top of the Modells sign, and fell back onto the warning track.

The Phillies could not come back as John Bowker lined out to end the ballgame. Cole Hamels will take the mound tomorrow night in what should be the division-clinching game.

The Mets and Braves play tomorrow at 4:10. If the Mets can crush the Braves like they did tonight, then the Phillies can win the division before playing tomorrow's game. Come on, Mets!