Jamie Moyer is working on more than his return to baseball 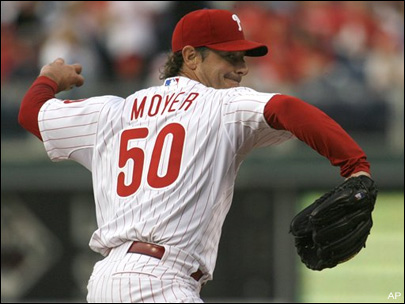 Jamie Moyer, 49, is still going strong in the world of baseball. Not only is he eyeing a return for the 2012 season as a starting pitcher, but, he's currently in the process of writing a book. Moyer is teaming up with Larry Platt, editor of the Philadelphia Daily News.

The as-yet-untitled book will chronicle Moyer's life and late-blooming baseball success, according to Platt, emphasizing the mental aspect to Moyer's game and his relationship with the late sports psychologist Harvey Dorfman.

The book is expected to be released by the beginning of the 2013 baseball season, when Jamie Moyer will hopefully be on the field after his second year back from tommy john surgery. The old man has still got it.

As a free agent, Moyer is hoping for a return in the majors this season with most likely the Padres or Mariners. He has recently moved to San Diego where he has been using Petco Park's bullpen to toss sessions and be scouted by the Padres, Mariners, and Angels.

Here's to Jamie having a healthy 2012 season, and congratulations on your book.