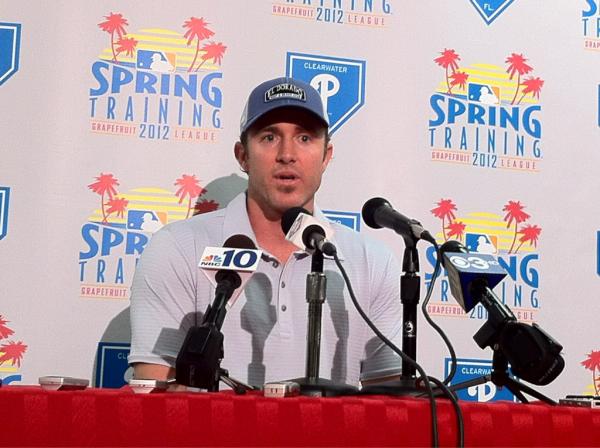 Chase Utley has not played a single game this Spring and has barely been seen until today. Utley, who has been dealing with chronic tendonitis in his right knee for over a year now, has become a great concern for the team. This afternoon, Utley spoke to media personel in the Bright House Field clubhouse.

Utley was asked if he will be ready to play April 5 in Pittsburgh for Opening Day.

Utley has been limited to just batting practice and workouts and has been kept in the dark all Spring. Utley has not been working on ground balls and says that it was his decision to back off on that because of the way his knee felt.

The 33 year-old veteran second baseman knew that he would not be playing the first half of March, but the mid-Spring mark has come and gone and still no Utley. He has been relieved by numerous stand-ins, most notably Freddy Galvis, who delivered the 9th inning game-tying home run in this afternoon's 4-3 win against Toronto.

Utley was also asked if everything was up to par so far this Spring.

After a lengthy pause, he said, "I don't know. That's a good question.  There have been some ups and downs. There are parts that are really positive."

That's not the answer we were looking for, Chase.

Utley did note that he has not fielded recently.

"Not yet," he said. "I'm making progressions to get to that point. I'd like to do that at some point next week."

When asked if he felt better or worse than he did at the beginning of camp, Utley simply answered that "today, I felt pretty good."

That leaves the door open for many questions. Is Chase Utley going to be able to play a game at all this season? If so, when will he start? If Chase Utley is not ready for Opening Day, who is Charlie Manuel's choice for second base? Will he be playing everyday or once every three games? These questions will just have to wait.

Get better, Chase. We need you.