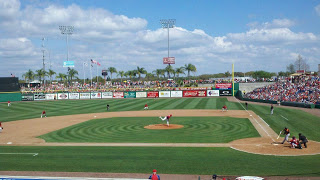 The Phillies played a game today, and lost 6-4. Here's the box score.

Well, there's lots and lots of unwarranted Roy Halladay panic. He pitched pretty bad today, and didn't last three innings. So of course, we're hearing his velocity is down and his arm slot is changed. This is one of the biggest non-issues of the spring to me. He was throwing 89 today, not 83. He threw 91-93 last year. He's 35 years old, coming off of four months off, and throwing in meaningless spring training games. We tend to obsess about these games up north, but if I learned one thing down there last year, it's that the results of these games aren't serious to everyone. Halladay will be fine on opening day, until we hear he's missing time. Don't figure this situation into your roster projections.

Chase Utley is a big issue to everyone this spring. You can look at it two ways: either it's that he's not played yet, and everyone else has, or it's exactly what they said at the start of camp, that we wouldn't see him much this spring. One thought I didn't entertain in yesterday's projection is the idea that Chase could play some first base, especially early on. Maybe even lots of first, if the next situation of the day is real.

Jimmy Rollins said he wouldn't be shocked if Ryan Howard missed the year. I've linked to it enough today, so I'll leave it at that. This one would really hurt. If Howard is at all at risk for this, Domonic Brown's pretty much gotta make this team (he's offensively superior to others in play). It's also just a huge blow. The good news: Jimmy says everything with a purpose, and a lot of the bench pick-ups have played poorly this spring, so I think Jimmy was doing some motivating as the undisputed leader of this team. I also must say, Howard's back in Clearwater, and beginning rehab again, albeit, in a boot. I was hoping for May, and now I'm hoping for June or July. I still don't see him missing the year.

There were cuts today, nine of them. None of them were guys I projected as on yesterday.

So here's the changes and question marks. I now put Galvis over Martinez for opening day, due to Mini-Mart's injury, Galvis' success, and my increased pessimism about Utley, and how they'll use him. I do not like putting a young prospect on the team who belongs in AAA just over stats in spring training, but if you're worried that Utley won't or can't play everyday, then Galvis makes more sense, and he can give Jimmy some days off too. The same logic I employ against Galvis, I employ against Dom Brown, who I debated putting on today, but I won't yet. The thing about him is, the Phillies would have to decide to take him as a starter over Pierre as a back-up, which is plausible, but i'm not ready to say they'll do. I really debated putting all three relievers listed on over D-Train, as Willis missed his scheduled appearance today, and look cooked last time out. He and Contreras remain real questions. I took Lou Montanez off the last five, but he's definitely still in the mix, just the priorities changed. I also left Scott Podsednik off that five. He's not out of it by any means, and he's outplayed Pierre so far, but I think Brown's big spring hurts his odds of making it, although he would be a great defensive replacement for a starting Brown.
The only thing that can derail this team is injuries. So far, they are teetering on the edge, much like last year. It doesn't feel as bad as last year to me, but it's still not great. I can't wait to get this team back up north.
Topics
Uncategorized