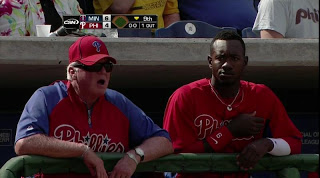 The Phillies fell asleep for yesterday's game with the Pirates, and lost 3-2. Here's the box score.

There was little news after Dontrelle's release. I think the biggest thing to take from this game was the battle between Podsednik and Pierre. Pierre went 0-for-4 with a walk, and Podsednik went 1-for-3 with a walk. Podsednik stole his fourth bag, and Pierre got number two. Freddy Galvis had a hit and played second. Kyle Kendrick through 3.1 IP today in relief of Cliff Lee (4.2 IP). Otherwise, no one stood out too much.

I slipped Podsednik on, and otherwise left things be for now. As I stated yesterday, THURSDAY is my date certain, where if Utley and Contreras haven't been seen (it's the 22nd), they are not going to start the year on the team. This is helping Galvis as I see it make the team. All the uncertainty around Utley makes him the best choice. Two guys to watch though: Frandsen and Montanez. Montanez is having a good spring, and Frandsen is super versatile. I continue to think Dom Brown is killing himself with every day he misses. He's gotta get on that field.
Topics
Uncategorized