Reasonable Expectations For Freddy Galvis, Ruben Amaro, and Second Base 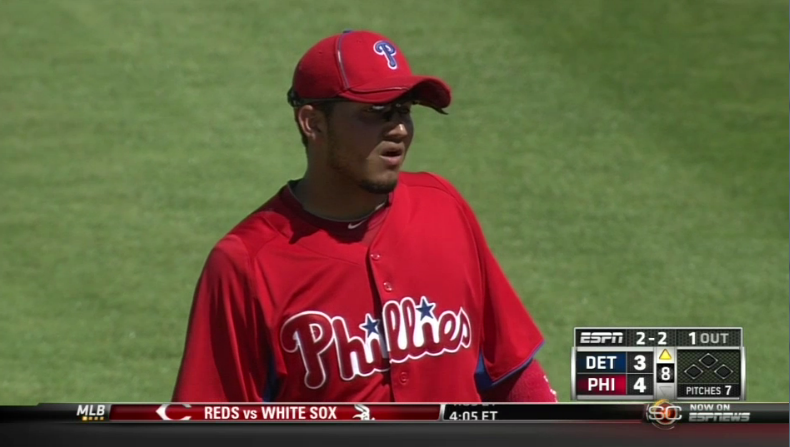 Since the announcement that Chase Utley probably won't be on the Opening Day version of the Phillies, the panic has been measurable in Phillies-World. I've heard people say Galvis will be fine, or he's a bum, that Amaro screwed up trading Wilson Valdez, that Utley screwed this team by not having surgery after last season ended, that they must make a major trade now, and just about every other crazy idea.
There are some decent ideas, like Omar Vizquel, and then there are some bad ideas (like packaging Dom Brown and some of our pitching prospects to get David Wright and move Polanco back to second). Even with Michael Martinez's broken bone today hurting us some more, let's not forget that the Phillies still have multiple options at every infield position in the major league camp.

I haven't even figured in the Pete Orr's and Kevin Frandsen's of the world, though I could have. The Phillies have a lot of depth. As for the gaping holes at first and second, it's important that we don't over-state the bar they have to clear here. This isn't Ryan Howard or Chase Utley of 2008. While replacing Howard's home run power will be hard (they simply can't), let's just be honest about where Chase is at in his career:

By no means was Chase Utley now a scrub. He also was not an MVP candidate anymore. He hadn't played 130 games since 2009, or had 500 AB's, or hit 20 HR's, or drive in 90, or frankly do any of the stuff we used to take for granted. Chase Utley was in a decline since after the 2009 season, and that was just the reality. I'm not looking to get into a debate about whether or not Chase was the best position player in Phillies history not named Mike Schmidt (I think that's a tough argument either way), I'm saying that the player who dominated the league from 2005 to 2009 was slipping away as is, and frankly probably wouldn't have moved in the right direction anyway in 2012, particularly since he has chronic knee issues and a degenerating hip.

So Ruben says that Freddy Galvis will probably play second, which is fine by me. Galvis is a 22 year old homegrown guy, who probably belongs in AAA this season in the ideal world, but who has shown improvement. Frankly, the Phillies need some homegrown guys to step in for the near future, and he and Dom Brown make up the entire list of ready talents in 2012. He brings a great glove, and he and Jimmy Rollins could be a double play tandem to watch this season. His bat? Well, it's definitely a question mark, but it improved a lot last year. His AA/AAA numbers were:

Now, by no means do I think he'll hit .280, even if he's at .273 this spring (who cares?). The question is, in what we hope will be a limited time until Chase returns, can he hit anywhere near .259? Can he hit for any kind of power at all, even doubles? Basically, can he do considerably better than Michael Martinez did last year (if he hits around .200 it's a failure)?

I think the answer is yes. I think it's completely reasonable to think he can minimally match the .230 or so that Wilson Valdez and Pete Orr put up replacing Utley last year, and can be much better than Martinez was. I would love to see Galvis hit .250, would accept .240, and think that at .230 this team can still play, because his glove is exceptional. Yes, this team is losing Ryan Howard too, so you hope for better from second, but they don't have to win 102 games again, they have to make the post-season. Galvis job is to keep them afloat. Anything above .250 is a dream. Anything above .230 is probably enough.

Which leads me to Ruben and Chase. Looking backwards, at least one of them deserves a lot of blame. If Chase has chronic knee issues, this should have been dealt with before camp. Could Chase have went and hard surgery after last season? Maybe. It was risky, but it beats just possibly being done, right?

Could Ruben, if he knew this issue was going to happen again, have done more this off-season about second base? Yeah, he could have. Should Chase have updated them on where he was better? Well, we don't know that he didn't, but if he didn't, he screwed up bad.

While many have weighed in on both sides of Ruben trading Wilson Valdez, I'll split the difference a bit: Valdez isn't great, and it's not the end of the world, but if you knew Chase was busted, why deal him, since he's played with Jimmy already? Wasn't he better than Martinez (who would have been an option prior to today)? At least one of Ruben and Chase deserves blame, if not both, for the spot the Phillies are in.

To play devil's advocate though, what would Ruben have done? This team has a high payroll, what big time second baseman could he have gotten though? Could he have changed the current situation that much? Remember now, if Chase misses 2012, the insurance company will begin to kick in money on his payroll, essentially saving money for the Phillies. In other words, it's easier to do something now, it was hard then.

With that said, Ruben shouldn't go do something crazy now. No one available in a trade right now is worth any kind of prospect that may play for this team in the next couple years. Do you honestly think Blake DeWitt is the answer? For the right price, he could be helpful, but what would you trade? Orlando Hudson? Sure, if we don't have to pay him most of his salary, he'd be a decent fit, but how much will San Diego really pay? Let's be serious here, the Phillies should not trade away any good prospects, or pay a bunch of money, to fill a hole that they're not sure how long it'll be open, or how big of a deal it is.

In short, the Phillies should aim for about a .240, .700+ OPS performance early on without Utley, and hope that great defense up the middle and great pitching can carry them until one or both of Howard and Utley return. If they aren't coming back, or they aren't pitching, then you can look at other options, if you need to.

Honestly though, in the short term, the Phillies have a reasonable chance to get what they need from both right-side infield positions to stay in the race, and things should improve as the year goes to the point of being able to contend again.