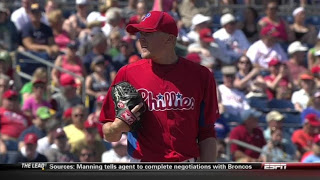 Well, today was a day of movement in the Phillies system. They moved some guys out, assigned workout groups for the week, and generally did stuff. I saw nothing truly stunning, but I did see plenty of story lines generally play themselves through. Maybe the biggest surprise was Gillies and James being both in the Reading group, but that's not shocking.

So, with the moves in mind, here's my Iron Pigs Roster:

Reading:
It's hard to get this exact, especially because a lot of these arms are all over the place. The Iron Pigs tweeted their spring stats, which is cool. The Phillies are clearly over stocked with outfielders in the upper level camps, and have the same issue with relief pitchers. I'm just wondering how many "seven day DL's" will be used.
While I'm not even close to prepared to make a call about Clearwater or Lakewood, my GENERAL opinion is that Lakewood looks to be stacked with position player guys, and Clearwater with starting pitching. Reading, in general, looks very good. Lehigh Valley? It looks similar to the team that made the championship series last year, so they should be good, but there's only a couple of non-reliever prospects there. I'm looking forward to some minor league ball.
Topics
Uncategorized