Utley Back In Camp, Martinez Out 6-8 Weeks, RAJ Looking For Utility Infielder 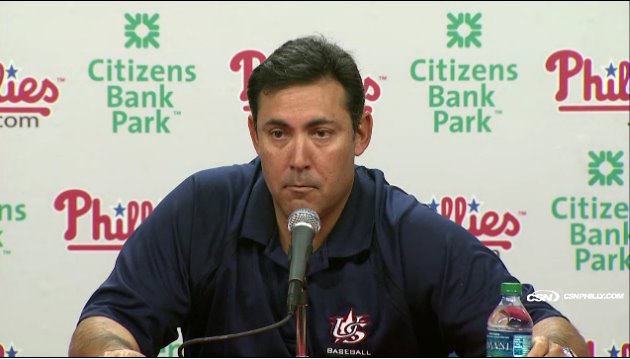 Chase Utley is back, but please don't get excited. Ruben Amaro has only stated that "Chase is here."

Amaro nor the Phillies have said anything about Utley's condition after he left camp to see a knee specialist earlier this week. Amaro, did however have news on Michael Martinez. Martinez, who took a pitch off of his right foot in Tuesday's 4-1 over Baltimore, broke his right foot. It will be at least 6-8 weeks before he can even be on the field again.

With Utley and Martinez both out for a presumably long time, the Phillies are left with no infield depth this year.

This is where things get interesting.

According to Philadelphia Inquirer's Matt Gelb, Ruben Amaro is now "inclined to acquire a utility infielder from elsewhere. Strongly hinted he will not dip from his starting pitching depth.". If this is the case, than Joe Blanton may not be headed anywhere.

Domonic Brown, who was justsent down to minor league camp this morning, may be the Phillies best bait to lure with.

Note: We should have NEVER traded away Wilson Valdez.