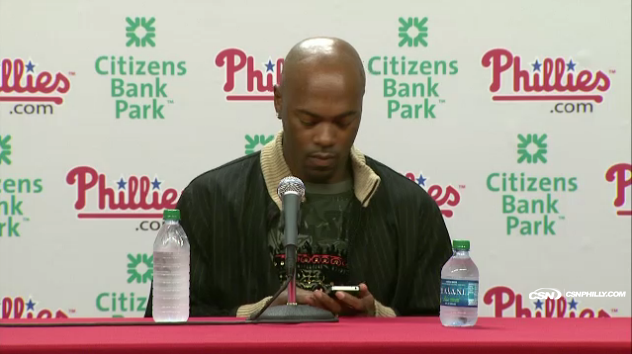 Finally something is changing: the Phillies are sitting Jimmy Rollins today in hopes of a better offensive output.  Pete Orr, last night's hero gets Rollins' slot in the lineup but at second base as Galvis slides over to shortstop.

Rollins is in a 3 for 32 skid, helping his batting average sit at .239 and has a whole two extra base hits.  Not exactly three-hole hitter material.   Charlie should bat him 7th or something if he is allowed to return.

Pete Orr, however, would have been on pace for 162 extra base hits if he was allowed to play.  He has two doubles and a triple in three games.

Cole Hamels hopes the offense works.  He is 2-1 with a 2.95 ERA in the early going.  Trevor Cahill is a decent pitcher, sitting at 1-1 with a 2.84 ERA, their prized acquisition this winter.

Well, game is at 3:40 on Comcast Sports Net so you'll probably have to cheat and listen/watch at work.  Unless you don't have a job, of course, which is wonderful in that it frees you up to watch South Beach Tow later.