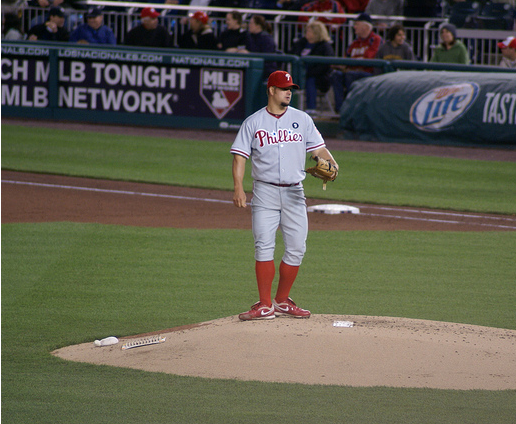 This is getting old.

The Phillies tried to avoid a series split this afternoon in San Diego with Joe Blanton on the mound against reliever-turned-starter Anthony Bass. Some very sluggish defense and poor offense from this team wouldn't help.

The Padres would strike first this afternoon thanks to a double from Chase Headley which socred Will Venable, then a sac fly from Nick Hundley. 2-0 Padres after the first.

Juan Pierre hit a single in the second inning on an error from Will Venable, his second of this series, which allowed Carlos Ruiz to score. 2-1 Padres.

In the bottom of the third, Nick Hundley sliced a triple to score Chase Headley, followed by an RBI double from Yonder Alonso who reached on an error by Jim Thome at first base. 4-1 Padres.

Nick Hundley continued his hot afternoon in the bottom of the fifth with a two-run home run to left field. 6-1 Padres.

Joe Blanton would receive the loss this afternoon in a six-inning effort. He walked two and struck out two, allowing six runs (three earned) on seven hits.

Joe Savery pitched two scoreless innings in relief, just one day after being shipped over from AAA. The roster spot opened back up for him with the absence of Cliff Lee.

The Phillies could not come back from a five-run deficit and dropped game four of this series, tying the series 2-2 with the Padres.

Tomorrow, the Phillies and Diamondbacks will start at three-game series in Arizona at 9:40. Kyle Kendrick will start in place of the injured Cliff Lee.