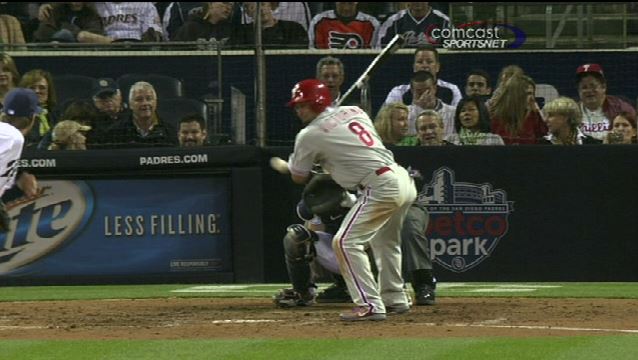 Former Cincinnati Red Edinson Volquez took the mound tonight for the Padres against Cole Hamels who has been victorious in recent years in San Diego, his home town. Carlos Ruiz was out of the lineup and will be for the next couple of days with a swollen wrist.

A run wouldn't score in this game until the fifth inning. The Padres came close in the fourth with a bases loaded opporunity, but Hamels made it out of that jam. In the fifth, Jesus Guzman grounded out to score Cameron Maybin from third base.

The Phillies loaded the bases in the seventh for Brian Schneider who got his first hit of the season tonight, sending home Shane Victorino to tie the ball game. Juan Pierre hit a two-run single which scored Ty Wigginton and Freddy Galvis, putting the Phillies up 3-1.

Cole Hamels pitched an iffy six innings tonight allowing one run on nine hits, walking one, balking twice, and striking out three. Jose Contreras (who hasn't pitched in the majors in 307 days) replaced him in the seventh inning and walked one, tossing nine pitches total.

In the top of the eighth, Shane Victorino slammed a solo home run making it a 4-1 game. It was his second of the year, and seventh as a team this season.

The Phillies won their thirteenth consecutive game at PetCo park tonight thanks to some much needed offense and stellar pitching by Hamels, Contreras, Chad Qualls, and Jonathan Papelbon who closed it out tonight. They're back to .500 and are now 7-7, tied with the fourth place Marlins.

The Phils and Padres will play their third game of this series tomorrow night at 8:35. Roy Halladay will get the start for the Phils with Cory Luebke on for San Diego.