Phillies’ Singles Hitters Actually Put Together Some Runs, Back Hamels and Defeat Mets 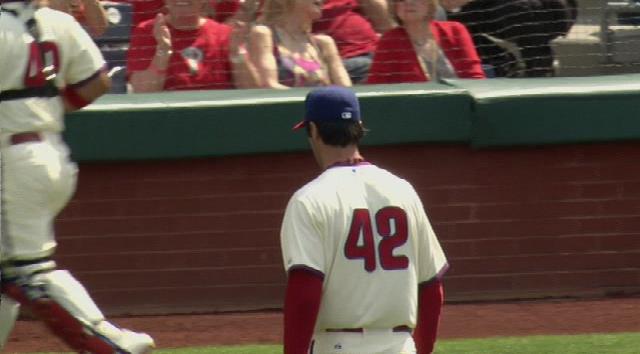 I get to write a rare recap since everyone's watching hockey or at work.  Too bad you probably are too and not reading this.  But, the Phillies did play, and avoided a sweep by the Mets.

At first, it looked like the Phillies offense was taking the day in addition to the whole team wearing #42 off to honor Jackie Robinson.

Cole Hamels spotted the Mets 2 quick runs on a home run to Ike Davis, much like Phillies pitchers have done this weekend.  However, after that, Hamels was stellar.  He completed 7 full innings giving up only those two runs.

As usual, the Phillies got tons of singles and seemingly continued to leave a billion of these runners behind, since singles don't score guys from first. The Phillies got three in a row to start the game off of the Mets' Mike Pelfrey, to bring them within 1.

Finally in the bottom of the 7th inning after Cole Hamels departed, the Phillies woke up – sorta.  Shane Victorino and Jimmy Rollins each had singles, and then moved up a base each on a wild pitch.  Laynce Nix followed with the first extra base hit of the day, a fly ball to left field that Scott Hairston could not handle.   The Phils took a one-run lead.

Chad Qualls got the Mets out in the top of the 8th. , and in the bottom of the 8th, poor defense and errant bullpen pitching gave the Phillies a bigger cushion.   Pete Orr led off with a double.  After Jim Thome struck out, Placido Polanco reached on an error, and Jimmy Rollins walked to load the bases.   Mets pitcher Manny Acosta then walked Hunter Pence to force in a run.

Acosta was relieved by Miguel Batista–wait, he still plays baseball?   Well it turns out he does, just not well.   Batista served up a bases-clearing double to Ty Wigginton and the Phillies took a commanding 7-2 lead.  John Mayberry Jr. followed with a dribbler right down the first base line that just stayed fair for a single.  Ty Wigginton took advantage of the Mets waiting to see if the ball was fair and scored, 8-2 Phillies.

Jonathan Papelbon, warming up to protect a one-run lead, came into the game up six runs and took down the Mets in the bottom of the 9th. Phillies win 8-2.

The Phillies fly out to San Francisco where they will play their three latest games of the season, as Halladay, Blanton, and Lee get to face Lincecum, Bumgarner, and Cain, all at 10:15 p.m.  Make sure you have your 6 Hour Energy shots ready.