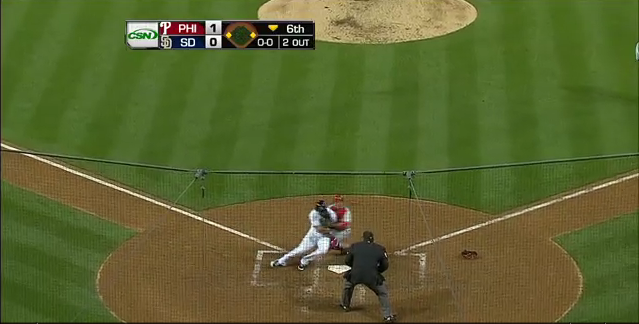 The Philadelphia Phillies scored two runs tonight via a sac fly by Jimmy Rollins and Hunter Pence scored on a passed ball. That is all the needed. Meanwhile, Juan Pierre picked up the first triple of the season, it was wasted nonetheless.

The Padres had first and third with one out. Jeremy Hermida was struck out by Worley for out number two. Chase Headley attempted to steal second on the pitch and Ruiz threw to Jimmy Rollins and caught Headley in a run-down. WHAT A PLAY !!

Worley went seven shut out innings, allowing only four hits and hree walks. And he struck out eleven batters. ELEVEN! It is a career high.

Jonathan Papelbon saved the ball game with a double play and a strike out for his 4th save of the season. Vance Worley gets the win!