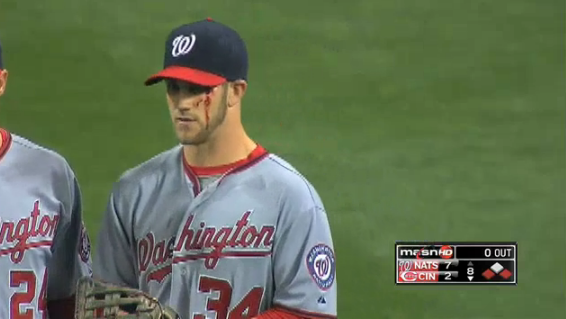 Remember when Cole Hamels hit Bryce Harper?  Harper made Hamels look really bad because he took the mature road and only showed him up by stealing home and making fans' jaws drop.  Immaturity among the immature can only hide for so long, and Harper made himself look really bad.

Last night after going 0-5 with three strikeouts, Harper put his own team's best interest on the line and gave himself 10 stitches and a bloody eye.   After a poor at-bat, Harper slammed his bat against a dugout tunnel wall, and it turns out bats can bounce.  The bat bounced right back and hit him in the eye, requiring major stitchery.

His manager Davey Johnson now says he will miss 1-2 games due to this injury.  Harper, unable to get his manager's polite message that he will essentially be benched for being stupid, could not keep his mouth shut and said, "The doctor said I could play, so I’m going to play".

Good move – now the manager is going to have to make you look like an idiot and bench you.  Even smarter: Bryce Harper's reaction to a question about whether he learned a lesson:

As a Phillies fan, I say Harper is allowed to do this as much as he wants.  Turns out, Cole Hamels did not have to send any messages with pitches; Harper will take care of himself.