Eagles Flyers Phillies Sixers About Us Write For Us
Jamie Moyer Designated for Assignment By Colorado Rockies; Is That it for Jamie?
On Doc Halladay, Roy Oswalt, Ryan Howard, Injuries, and the Phillies

Carlos Ruiz Returns from the Dead to Homer for Phillies, Take Down Mets 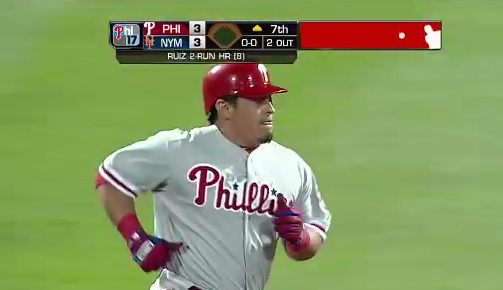 The Phillies had one more game in Flushing (like "flushing a toilet"), New York at Citi Field and the series was at stake.  Dillon Gee went up against Cliff Lee who can't buy a win for the Phillies.

Well, Cliff Lee did not win again.  The 1st inning was a little rocky for Lee, giving up a run to the Mets, but former Met Ty Wigginton answered with a home run in the top of the 2nd inning.

The score remained 1-1 all the way until the 6th inning when Cliff Lee served up a two-out home run to Lucas Duda with one on to give the Mets a 3-1 lead.   But, the Phillies would answer in the top of the 7th.  Brian Schneider, starting in place of Carlos Ruiz due to a minor hamstring injury, hit a two-out double.  Then, Cliff Lee was pulled for a pinch hitter, none other than Carlos Ruiz.

Bobby Parnell was called in to face the pinch-hitter and did not fare so well for the Mets. Ruiz slammed a ball over the left field fence for a two-run home run.  The game was tied.

After Antonio Bastardo pitched a scoreless bottom of the 7th, the Phillies added one more run.  With Juan Pierre on third base and Hunter Pence on first base, Shane Victorino lined a ball to center field.   Pierre tagged and scored to take a 4-3 lead.  Despite being mired in an 0 for 15 slump, Victorino got the RBI for the go-ahead run.

Then, in the top of the 9th inning, Jimmy Rollins partied like it was 2007 and absolutely SLAMMED - and I mean SLAMMMMMMMED an upper deck home run to right field to make it 7-3 Phillies.  Rollins had three hits tonight in all.

But that was not it.  Shane Victorino broke his slump with a 2-run single.  The Phillies batted around plus one, plating six total runs in the top of the 9th, as Jonathan Papelbon warmed up.

But of course your closer can't pitch unless he's in line to get a save in the box score, so Raul Valdes came in to pitch the 9th inning and gave up his first run of the season on a Lucas Duda solo home run, Duda's second of the night.    Kirk Nieuwenhuis and Andres Torres had back to back hits with two outs to score another run to bring it to 10-5.  With Torres on second base and Charlie Manuel growing impatient, he called on Jonathan Papelbon to get the last out.

Papelbon came in and after fouling off many pitches, Daniel Murphy singled up the middle to score another run.  Papelbon then got the last out, it wasn't for a save, and he did not blow up.

The Phillies are off Thursday and begin a three-game series with the Marlins on Friday.