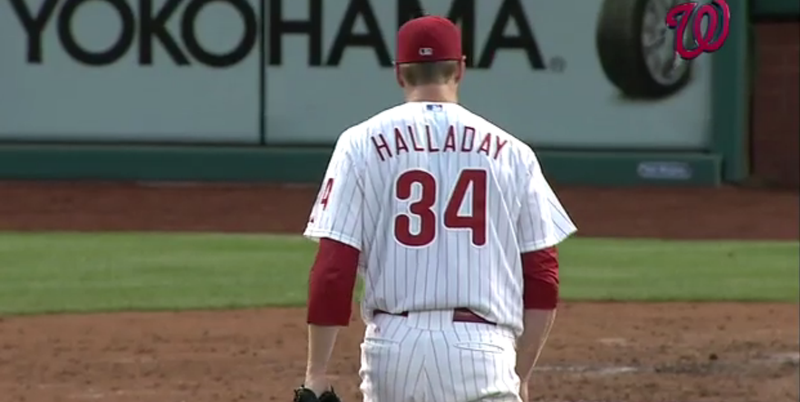 Just another one of those games in which you'd rather throw your tv out of the window than have to watch Roy Halladay suffer another loss. Charlie Manuel posted his 80,000th lineup of the season… It wasn't one we'll be seeing in more games down the stretch.

It was not a simple third inning for Roy Halladay. After Jordan Zimmermann and Steve Lombardozzi singled, Bryce Harper sent them both home with a triple to right center. Adamn LaRoche sent up a sacrifice fly to score Harper, followed by a solo homer from Ian Desmond. This Washington team is tough this year, I'll tell ya that.

Carlos Ruiz faced an early exit in the top of the third after being ejected by home plate ump Gary Cederstrom for arguing balls and strikes. It was one of the most subtle ejections you'll ever see, Chooch didn't even stand up. Brian Schneider would take his place in the lineup, batting fifth.

In the top of the fourth, Rick Ankiel sent a lead-off homer to the ivy in center field, putting the Nats up 5-1.

Doc only went six innings tonight due to a rough beating and a high pitch count. He allowed five earned runs on nine hits, walking one and striking out six. He tossed 92 pitches total, 66 for strikes.

Meanwhile, the Phillies were scoring nobody on the basepaths. They had multiple chances with runners in scoring position tonight, but no one could deliver a big hit. With two outs in the fifth and men on second and third, Hector Luna struck out looking to end the inning. As frustrating as this can get, it probably can't get worse. There's your silver lining.

Jake Diekman pitched a fantastic inning and 2/3. He struck out four and allowed just one hit. 17 of his 20 pitches were called for strikes.

Jose Contreras entered the game after Diekman allowed the single to Danny Espinosa (but not before he struck out Rick Ankiel). Contreras recorded the out, leaving it to the offense to hopefully come from behind and score some runs.

Erik Kratz was called up today from Lehigh Valley to replace Rollins on the 25-man roster. He would pinch hit for Schneider in the eighth with one out. Well, Kratz sent a ball deep into center field with what was his first major league home run ever.

Tyler Clippard closed it out with a 5-2 lead in the ninth against the Phils. Another ugly loss in the books, their fourth straight.

Cole Hamels will start the finale of this series tomorrow against Edwin Jackson at 7:05.