The Phillies’ Future At Second Base: Utley? Galvis? Hernandez? 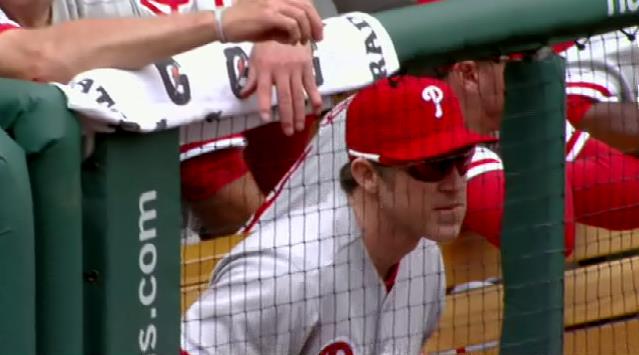 Well, you probably heard the news yesterday: Chase Utley worked out in left-field. Let me translate that for you in several ways:

We've heard for weeks that the issues with Utley were the lateral movements at second, and the crouching down. Well, in the outfield, problem solved. If Chase wants a chance to play five more years, and hit at his potential levels, this is a needed move. The middle infield is a killer on the body. It's a good move.
Chase Utley would be a free-agent after 2013. Placido Polanco at third base is in contract year, but has an option year ahead, so he could be around through 2013. Rollins' probably sees free agency after 2015. Howard, 2016. Knowing that, how do you think ahead?
Freddy Galvis appears to be showing us all that he is a real big leaguer. After last night's 3-for-5, three RBI's performance, he's hitting .250. He has 12 doubles, a triple, three homers, and 22 RBI's. He leads Jimmy Rollins in all of the categories mentioned. Sure, he has problems too, (.279 OBP), but he's developed into a guy who will be around a while. But where? Sure, he looks like he'll be at second this year and next, if Chase really moves, but beyond that? Is keeping him at second the smart move?
If you haven't met him yet, meet Cesar Hernandez, second-baseman in Reading, and member of the 40-man roster. Cesar has just entered a slump, but still is batting .305, with 12 doubles, 4 triples, and 23 RBI's. Sure he has no homers, but still has a .777 OPS. At 22 years old, he probably reaches the majors full time in two years, and in some role next year. Obviously, he can't play the same spot as Galvis at the same time. Rollins is around for a little while.
So, what to do?
I do believe that Freddy Galvis could play just about anywhere. I also know he's a better defensive second baseman probably than any other option. One option, if you want to stay in house, is to move one of these two young infielder to third. I'm certain that Galvis could do that, but Hernandez i'm unsure. On the other hand, second is a more critical defensive position than third. Hernandez could be trade bait if they decide he can't play third and Galvis shouldn't move, because the lower minors have third base options on the way. Ultimately though, I believe either one will move to third, or one will be dealt, and someone else signed. Either way, the future at second base, post-Chase, is actually very bright.
Topics
Uncategorized