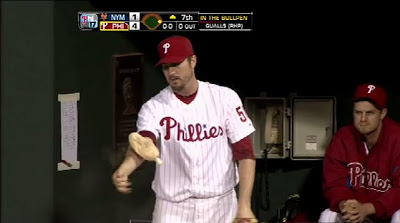 Here's the facts: The Phillies stink. They're four games under .500. In the last nine games, ALL in division, they have blown FIVE leads in the late innings. That's five. None in the 9th (though they lost a tie in one). In other words, if the starter isn't going eight innings or more, they are likely losing. There is no reason to have any confidence in a game where more than the starter and Papelbon pitch. They're not likely to win it. This also sort of gets the offense off the hook for where this team is at- they've given this team the lead in every game but one going to the 7th during this stretch.

Well, Ruben made his big move to fix this- he optioned Joe Savery to AAA after tonight's game. Nevermind that Savery's numbers aren't that bad- second in WHIP on the club, fourth in opponent batting average, and showing better control than in the past- he doesn't, and shouldn't at this point, pitch in the 7th or 8th inning of a game we lead close. That's not his job here. So basically, he's gone, but we still have Sanches, Contreras, Qualls, Bastardo,  and Kendrick all here, so we still have a bunch of bad relievers here. Sure, someone is coming up- I presume it's Jake Diekman since I doubt they'll put someone on waivers to clear 40 man room for someone else. Diekman might be a help, sure, but is he a set-up man either, at this stage in his career?

Honestly, this team needs a lock-down 8th inning guy, and i'm not sure there's one sitting around the minors. So, that means they have to get one. The best free agent option was Mike Gonzalez, but we just let the Nationals have him. So, they will have to trade for one. Now, being the value of these guys are for maybe three outs a night, I do not believe that trading the top minor league talent is worth it. So no Domonic Brown, Valle, May, Pettibone, James, etc. None of those guys should move in a deal like this. So how would they make a move to sure up the pen?

They'll probably have to trade a starting player from the big league roster. Yes, one of the guys in our line-up. So you're really looking at Pence, Victorino, Polanco, Rollins, Pierre, and Chooch, the regulars (they won't trade Galvis, and Wigginton isn't worth much). Here's the problem- for the most part, those guys are worth more than a set-up guy in a trade. Pierre's the only guy close, and he's hitting .341, so I would want more today. So really, this is a tough fit, right?

Well, maybe. I'm going to propose something insane, and maybe it'll make sense. Shane Victorino is a free agent at the end of the season. Shane should be able to get five years at a solid $12 million per, or better. I cannot see the Phillies committing that to him, being that they haven't signed Cole yet. In fact, I wouldn't want them to sign him and not Cole. So, yes, I'm saying he'll probably walk anyway at the end of the year. So, what would Shane fetch?

My guess is, Shane would fetch at least three solid players from someone, and at least one of them could be the set-up man the Phillies want. Is a set-up man plus a few upper echelon prospects worth trading Shane? Maybe, maybe not. His ability is well above his .244 average right now, and he's been an important piece of this team. He's the only guy though that the Phillies could part with reasonably under the circumstances, and would fetch them something good in return.

This team needs two things right now- a lock-down set-up man, and a real jolt to the clubhouse to put some urgency back in. Trading a regular out could deliver both of those. The other thing about trading an outfielder is that it's the one position that the Phillies have upper level prospects at that you can hope would work. Trading Juan or Shane would open a starting spot for Dom Brown, and he would have the rest of this year to prove he belongs. If he fails, you can reasonably hope for one of the Reading guys to emerge this year. The main point though is, Shane's probably gone after this season anyway, and he's not producing, so why in the heck not?

I'm not sure this team can ride it out for Chase and Ryan to get back. They're not the fastest starters out the gate, and this team isn't all that good. More importantly, they're not going to throw the 8th inning. Sending down Joe Savery isn't going to cut it. In fact, it fixed nothing. Ruben needs to get more creative, and change the culture of a lackluster, so far heartless team. That may require going controversial- and putting his neck out there. Hey, how secure is his job if this team bombs anyway?